So much progress, so much love

If you've followed our journey with Lochlan from his ASD (Autism Spectrum Disorder) diagnosis to now, then, you know each day brings it's challenges and often offers hope.

We've had him on medication for a cyst that was located on his pineal gland a few months ago, and we are seeing slow and consistent positive results. He makes more eye contact, responds to us when we address him, is starting to follow verbal directions, plays with his brothers (miracle!), has more normal reactions to medications such as Advil, and is no longer suffering from vertigo and car sickness. He screams only when he's angry about some perceived injustice (hunger pains, for instance :-), compared to the 4-5 steady hours he was screaming every day. He is becoming extremely frustrated with his inability to communicate and he is trying harder to show us what he needs/wants.

He initiates affection persistently and seeks each of us out. Since Kelton's birth, Lochlan has been only indifferent toward him, showing him no affection. Obviously this is another dramatic change. 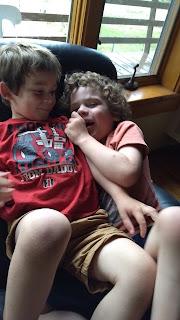 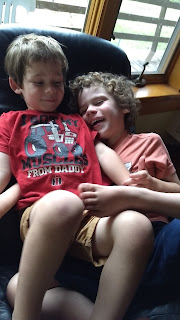 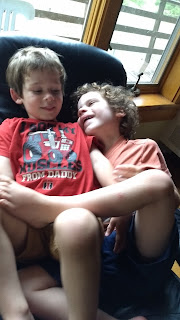 He is finding joy, finally. 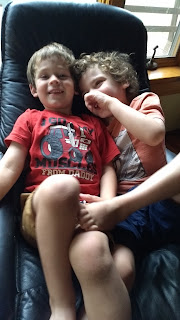 We also found out that he has been approved for state funding for therapy services. He will be starting services in September! Oh, for his progress to continue and his joy to abound as he continues on this very tough journey we call life.

I'm so glad he is doing well. I think of you all often and wonder how the little guy is doing.