Hummingbirds and a beeeautiful man

As we hammered the nesting boxes into place on our new chicken coop, I discovered an old wasp nest. I showed it to the boys and Madigan asked, "What's a wasp?" (apparently the long winter months have faded a few things from his memory). Before I could reply, Paugie confidently said, "A wasp is a kind of hummingbird." I giggled under my breath and waited to see if he would elaborate. "They fly all around, looking for things to eat and then they come home to sleep in their nests and lay eggs so their little babies will hatch" he explained. 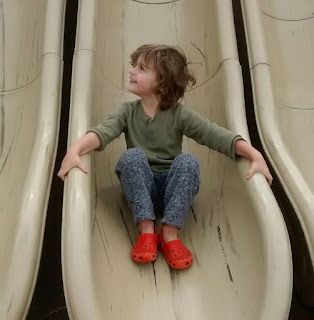 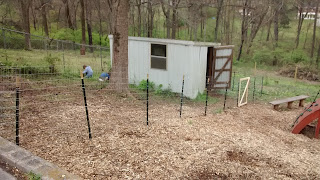 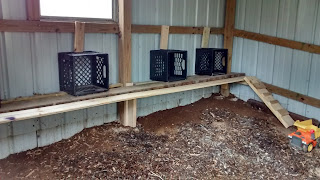 When I went in to see why the boys were still not sleeping, in spite of the late hour, I discovered Jevy laughing out loud and completely dripping wet. Every curl on his head had a droplet of water, and his clothes were heavily drenched and plastered to his body. There was a prodigious puddle at the base of his bed and no piece of his bedding had been left unscathed. I was perplexed as he was in his tent and didn't appear to have a cup of water at hand. I found Madigan faking sleep (a sure sign of guilt) and Paugie in genuine slumber. Before I could question him, Madigan sat upright and blurted out: "We were pretending to be firemen, and there was a raging fire {in the general direction of Jevy's bed}. The good news, Mama, is that we got the fire out." No doubt. Alas, the casualties of overactive imaginations. 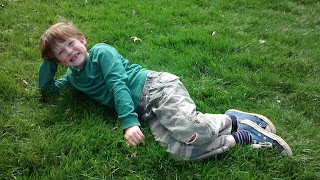 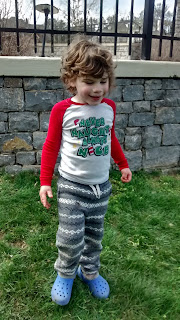 I was busying myself in the kitchen getting a very late dinner (thank you wretched DIY project #438) ready for a very hungry crew and realized with great frustration that I had forgotten to turn on the burner, so the already late meal was going to be 10 minutes later. After chastising myself again, a few minutes later, I started to have doubts. I turned around to watch the stove for a few minutes, only to discover that during the stampede of the dump trucks through the kitchen and around the house, one truck paused long enough for a chubby paw to reach up and turn the stove knob to the off position. When he noticed that I was watching, Jevy gave me a clever chuckle, as if to say, "I wondered how long it would take you." After a reminder that such activities are not actually sanctioned by the parental figures, he happily moved on without another attempt. I'm not taking anything for granted. Life just got a little more complicated. ARGH. 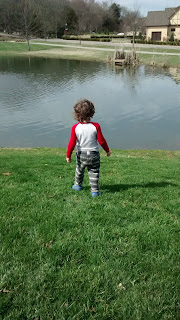 Yesterday Daddy was home, so I splurged and decided to take a nap while Kelty took his nap. I let him curl up with me on the bed and he wrapped himself into my arms, snuggling down underneath his blue blankie with his head right underneath my chin. After a few minutes just sitting quietly in my arms, he started stroking my hand with his tiny fingers and he didn't stop until he was fast asleep. Words cannot paint the picture of contentment I felt in that moment. 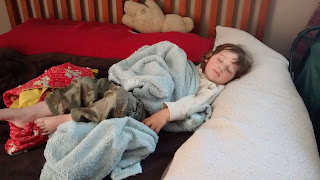 Costco seems to be a training ground (something like boot camp) for our family - the countless mishaps, awkward moments, spilled tears, weeping (mostly Mama's), impossible potty runs, unwanted advice we've been on the receiving end of... it's just our special place. This past week's Costco run proved not to be the exception. As soon as I noticed the extremely tiny gentleman (who was not much taller than Madigan) in the line ahead of us, I was anxious, as I knew my boys would be quick to notice, particularly with my extreme height only accentuating the obvious. Madigan was the first to blurt out rather boisterously: "Mama, see, that man is quite small!". As I attempted to remedy the situation with subtlety, Paugie emerged on the other side of the basket, noticing the man for the first time. Because informing me of all facts is of utmost importance at our current stage(s) of life, Paugie immediately announced excitedly, "Mama! That man is very tiny. He would fit so nicely in a Smart car." Not wanting to draw any more attention to the horror of that moment, we quickly exited with our newly purchased items and found a seat outside the store to eat our lunch. I stood the boys on the bench so that they were at my eye level and explained: "Boys, even when we notice something different about someone else - whether it's because they're short or tall, fat or skinny, in a wheel chair, or missing arms or legs - we need to remember, always and first, that every person is made in the image of God and therefore, they are beautiful, just the way they are. If you point out how someone is different from you, it may hurt them." Madigan: "Why would it hurt them?" (I loved this question so much because it showed me that he sees the difference, but he doesn't see differences as a problem).  I replied: "It might hurt them because they might not like that part of who they are. If someone is short and doesn't want to be short, it might make him even more frustrated about being short if you say something about it. Does that make sense?" Madigan nodded soberly. It wasn't apparent if Paugie had grasped my speech, but he had stood patiently listening to me, nevertheless, though it was obvious his pizza was beckoning his attention. 10 minutes later, the same gentleman exited the store. I braced myself. Paugie looked up, smiling, and shouted out: "Mama! Look at that BEAUTIFUL MAN!" Our new friend glanced my way, gave me a wink and his whole face lit up in a smile. I have so much to learn from these small humans. 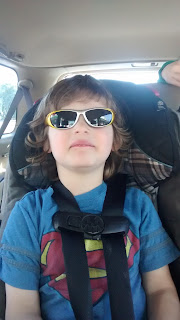 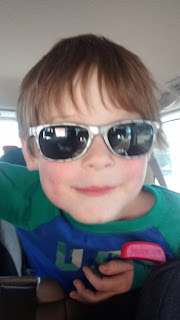 Posted by McBean at 7:54 PM No comments: 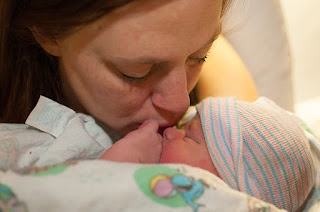 I call you "tiny human" not because you're small (you are off the charts in every possible way, height not excluded) but because you are like a full sized human in a tiny body. You can "pack a punch" as your Ankie Tae puts it. When you were born at over 10 lbs, I was pretty certain you were trying to get a head start in this band of bros that you are such an integral part of. 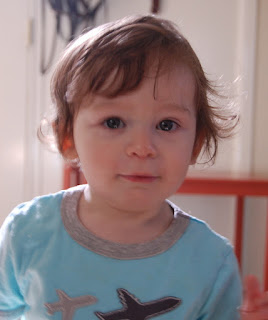 You were full of spark (I call it the "Hatcher spark", and I think you inherited it from your Great Grandpa Hatcher) from the moment you entered this world. 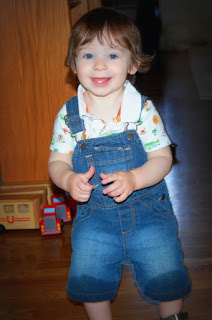 Your arrival into any room unfailingly brings smiles and you have a way of capturing an audience instantaneously. 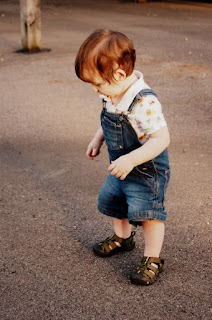 In accordance with your track record (as an overachiever), you started walking at 9 months and were soon running along with the three you revere, never missing a stride. 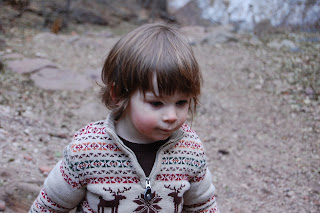 On our many hiking adventures, I've carried a back pack "just in case" but it has all been an effort in futility as you are never discouraged by rough terrain or miles ahead. You love the outdoors and you are the ultimate adventurer, much to your eldest brother's delight. 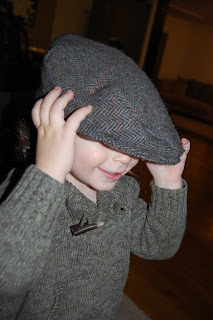 Your bucket full of charms is always ready at hand and frequently administered to your appreciative fans. 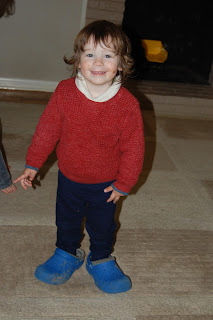 You've yet to encounter something you felt you could not accomplish. You are full of determination, hope, and complete excitement in all things possible. 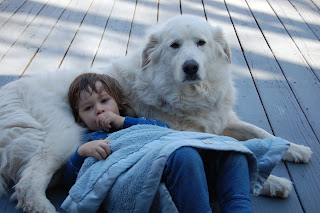 You love with all your heart and depend un-apologetically on each of us who love you most. You rely on each of us for strength and guidance while simultaneously walking in boldness and enthusiastically taking on every challenge you're given. 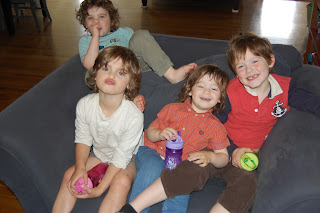 You made this family complete, Schmutz, and we are celebrating your life - you marvelous, inspiring and absolutely incredible you. With all my heart.

I glanced in to see Madigan wrestling his littlest bro away from an "untouchable" and heard them both giggling in the process. With Kelton still firmly grasped in his arms, Madigan leaned forward and kissed Kelty, saying, "You are making a bad decision, El Tootus." 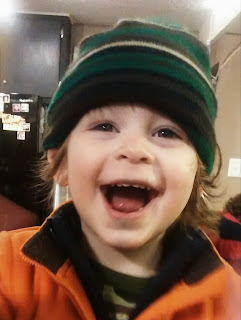 On a dull, chilly day, I found the two eldest topless on the porch. Upon further investigation I discovered Madigan with his school scissors in his hand, standing atop a large heap of brown curls that had been cut from Paugie's hair. My initial horror was eased when I looked closely at Paugie, whose natural curls tend to obscure such mishaps. "Madigan, you should not be cutting hair without Mommy's supervision." "Mama, if we don't practice, we'll never master the art of hair cutting." "I understand that, but you need to practice with me around to help you and to show you how it is to be done." A thoughtful pause. "Well, it's hard to learn how when you're cutting my hair, because I can't see what's happening. You need to show me all the steps next time you're cutting Paugie's hair." Oh this boy who wants so much to be the master of all things that interest him. I love it. And it terrifies me. :-) 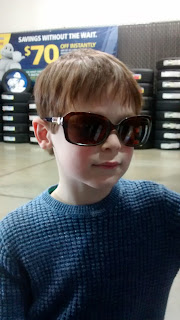 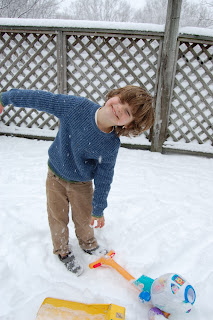 As we sat down to pray at the dinner table, Kelty dropped his fork dramatically, smiled and grabbed our hands to pray. After we prayed, he screamed out, "AMEN!". Then, he took a  bite and grabbed our hands again, for round two. We obliged and after round four, Paugie said, "I'm done praying." 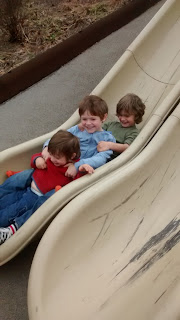 Paugie and Madigan have been helping me dismantle our basement to make it livable space. One afternoon, after they had helped for some time, I said, "Boys, you are amazing helpers. I don't know how I would do this without you." Paugie said, "We always want to be great helpers, Mama." Madigan affirmed Paugie's sentiment and added: "We are helpful AND handsome." Obviously, I'm blessed. :-) 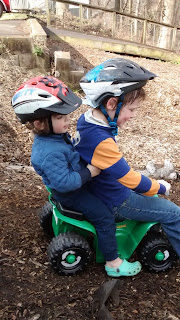 As I tucked the boys into bed, Jevy grabbed my hand and pulled it to his face. I stroked his cheek and he stared at me, willing me to never stop. When my hand started to tire, he grabbed my other hand and held it tightly so that I couldn't leave even if I stopped stroking his cheek. I stayed for a little while and then told him that I love him with all my heart and that I'm so incredibly proud of him and his eyes fluttered slowly into slumber. These moments make me want to stop time - forever. 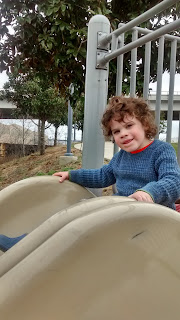 I heard the thunder of Tiger paws coming into the room and I turned around to see a very Celtic young lad with his Irish cap and a bow tie, dressed in mismatching clothes he had put on himself, and a pair of dress shoes. His sidekick, Paugie, was trailing behind him wearing a pair of shorts (of course - pants are overrated in all seasons), a Scottish cap, no shirt and dress shoes. He handed me a bow tie and said, "Mama, can you make me handsome?" No can do! You could not be more handsome, if you tried! 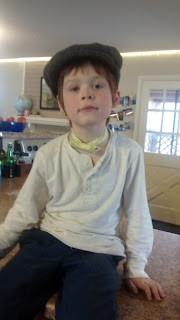 I don't understand how life can be so painful and frustrating and disappointing and heart breaking and SIMULTANEOUSLY (and almost constantly) be filled with so much overwhelming joy and beauty. 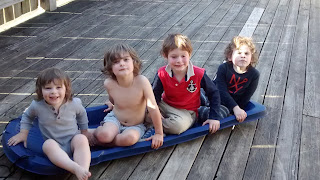 Posted by McBean at 9:07 PM No comments: