"Teach my Thy way, O Lord,
And lead me in a level path,
Because of my foes.
Do not deliver me over to the desire of my adversaries;
For false witnesses have risen against me,
And such as breathe out violence.
I would have despaired unless I had believed that I would see the goodness of the Lord
In the land of the living.
Wait for the Lord;
Be strong, and let your heart take courage;
Yes, wait for the Lord."
Psalm 27:11-14
Posted by McBean at 8:45 AM No comments:

If you jump off a bridge, you are in .
A grenade fell onto a kitchen floor in , resulting in Linoleum Blownapart.
Bakers trade bread recipes on a knead to know basis.
A boiled egg is hard to beat.
He broke into song because he couldn't find the key.
Show me a piano falling down a mine shaft and I'll show you A-flat miner.
If you haven't given up yet, here are the rest:
You are stuck with your debt if you can't budge it.
In a democracy it's your vote that counts; in feudalism, it's your Count that votes.
I wondered why the baseball was getting bigger. Then it hit me.
Police were called to a day care where a three-year-old was resisting a rest.
With her marriage she got a new name and a dress.
A backward poet writes inverse.
Time flies like an arrow; fruit flies like a banana.
Did you hear about the guy whose whole left side was cut off? He's all right now.
The roundest knight at King Arthur's round table was Sir Cumference.
The butcher backed up into the meat grinder and got a little behind in his work.

Looking Back and Looking Ahead

Today, I received a phone call from an old friend. I met her 3 years ago, when she came into where I worked, wanting a pregnancy test. She was just barely 16 years old and had already decided that if she was pregnant, she would have to have an abortion. She was taking drugs, smoked and drank alcohol, because that's what all of her friends did. Her mom was abusive, addicted to drugs and her dad was, for all practical purposes, out of the picture. She had only been with her boyfriend for less than 3 months, so she didn't know what kind of a future she could expect with him.

After verifying that she was pregnant, I sat down with her for a couple of hours to talk about her options, and the pros and cons of each one. She decided that her best choice, both for herself and for her baby, was so carry the pregnancy to term and potentially consider adoption. We found a maternity home where she could stay for the duration of the pregnancy, to reduce her risk of physical danger, as well as exposure to the drugs. She stopped drinking and smoking, so that her baby had a chance at a healthy future. She was excited about being a mom.

After being at the maternity home for about 5 weeks, she miscarried. She was devastated by the loss of her child, but her brief encounter with motherhood (and her acceptance of it) changed her life. She decided that she wanted to get graduate from high school (which she had previously been failing), get a college degree and make a difference in the lives of others who might be struggling like her. I was able to keep in contact with her for about a year, and then she fell out of my life.

So, now, 2 years later, she re-contacted me to meet for coffee. It was like a time warp for me, sitting across from this woman, who is now married (to the father of her baby), wondering if there actually might be a God (who loves and cares for her?), working her way through college and holding down a job in hopes of working her way into management. She has never gone back to the drugs ("what's the point?" she says... "They only bring ruin"). She still doesn't know what her future holds for her, but she seems excited to see what doors will open and to know that she has a future.

So, my friends, pray that I will have the boldness to explain to her about true hope (the hope of our salvation) as our lives re-connect and that she will discover the purpose and meaning of Life through a knowledge of the Creator.
Posted by McBean at 10:23 AM 1 comment:

In no particular order:
Lying on the couch with a Scottie body cuddled close.
Coffee and long talk with Kim.
Picking basil for lunch.
Riding Fancy in the woods.
Celebrating my hubby's birth.
Talking to Mom.
Volleyball with some of my favorite people.
Hugs from Danielle.
Progress on my book!!!
Encouragement from Denise.
Hot tea and German chocolate cake.
Reading "Good to Great" and getting motivated.
Sitting in George's lap.
Grande chai latte.
Listening to Cold Play.
Reading Patrick and Kim's story.
Listening to Matt's sermon (Wow!)
Rain on a sunny day.
Posted by McBean at 8:50 AM 2 comments:

Family Research Council had an article yesterday which I thought was very thought provoking.

"Amid flags at half-mast and a capital city shrouded in clouds, the sixth anniversary of September 11, 2001 has arrived quietly in a nation still divided over the war it provoked. From Ground Zero to the broken ring of the Pentagon, we can't help but remember how many of the fallen were heroes that day. They were men and women on planes, in skyscrapers, charging up stairwells, and digging through rubble. As diverse as they were, the victims had one thing in common--they were all patriots. Today, the spirit of 9-11--that of selfless determination--is still very much alive in our brave troops overseas. Despite months of bickering and distractions at home, our soldiers have carried out their mission valiantly, many of them making the ultimate sacrifice while their fellow citizens, speaking from the safety and comfort they provide, feel free to question what these soldiers are giving their lives for. While the news is trained on the war, few seem to remember why we're fighting it--not for Iraq but for the liberty Americans so quickly take for granted. Many in this country have forgotten that the best way to honor those who died on September 11--and since--is by upholding the commitment to do everything we can to keep it from happening again. Abandoning the war would be to abandon America's identity. As Anne Applebaum writes today, 'Perhaps it's time to take the main message [of Bin Laden] seriously: Al-Queda's long-term goal is to convert Americans and other Westerners to its extreme version of Islam.' This is the ultimate struggle between good and evil, the long-standing battle for our ideals of faith, family, and freedom. In the end, this war is not only a military conflict, but a spiritual one. And the entire Western world hangs in the balance. Though, as Martin Luther King, Jr. once said, 'I still have faith in America. ...I still have faith that we will hew out of the mountain of despair, a stone of hope.' Let's pray, six years later, that as the stone walls of the Pentagon have been rebuilt and construction is under way at the site of the World Trade Center, so too are we rebuilding our resolve that those who have died in our nation's service will be honored not just in memorial remembrances but in victory over tyranny."
Posted by McBean at 6:41 PM No comments: 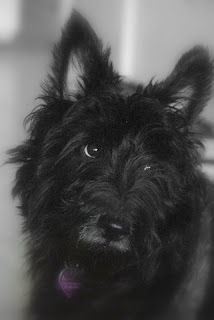 Who can turn down such a face? This is the reason why we are completely infatuated with our McScotties. :-) They're un"bear"ably cute!

One thing that amazes me about animals is what they can teach us, in life. Kris and I were talking, recently, about how much more we understand about our Creator by observing and interacting with His Creation. Kris, as a biologist, never really understood or appreciated animals, until after we were married, but he has a great appreciation for many animals (specifically two special scotties and one amazing horse), now. Smiles,

Posted by McBean at 9:14 AM No comments: