Recently, we had a special visitor from afar. My Uncle Jim, whom I hadn't seen for many years, made an epic journey from his sunny California all the way to this (typically) dreary state and got a taste of this experience that is our life. I'm pretty certain we exhausted him beyond measure, but he was such a treat to have here. 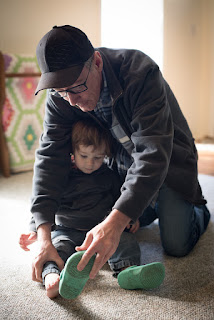 I was reminded of my childhood impression of this much-loved Uncle - he is filled with abundant gentleness and kindness. Watching him interact with the pack was beautiful. They instantly adored him and wanted to share their everything they love with him. 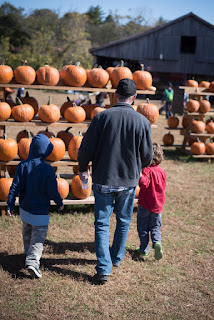 He reflects a mind that is deeply reflective, a heart that is perceptive to the details of those around him. He sees others with a selflessness and empathy few could comprehend, I think. 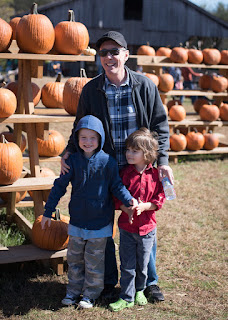 His kindness to others reflects a profound gentleness that is simultaneously and strangely complemented by courage and strength in fighting an ongoing battle with (a very rare form of) cancer. Throughout this battle he has and is persistently giving his life/energy to serving young people who are lost, hurting, and homeless, giving them hope and practical help that changes the trajectory of their lives. 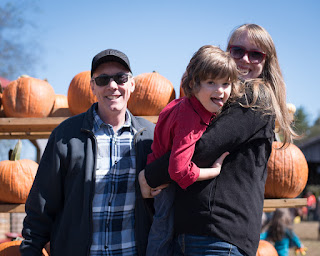 He trotted through Nashville and left a lasting footprint. 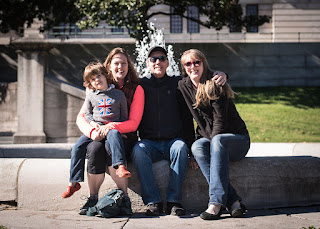 So much admiration I have for this man, so profoundly wanting him to know the love we hold in our hearts for him, as he continues the fight. This rowdy bunch of great small people love him with enthusiasm and what a delight for them to finally know him, for themselves. 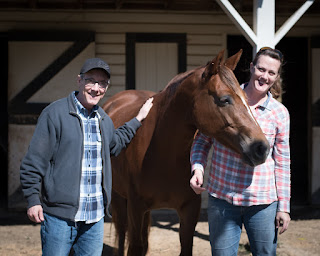 Theoretically. Somehow, in the 10 minutes of pandemonium that preceded our bedtime routine, all did not seem well.

As I hoisted the kiddos upstairs and indoors upon our return from feeding Devany, Jevy pitched an impressive fit - the beckoning of the 27 degree temperature and hovering darkness overpowered his (not-so-natural) inclination to comply with his mama's wishes/plans. As he descended into despair, his tears soon choked him up and I was rapidly subjected to a great deal of vomit. And more tears. After removing his freshly/massively soiled clothing, I whisked him into the bathroom with the intention of letting the shower do the rest.

As I entered the bathroom, a distinct splash of water accompanied my footfall and I looked down in horror to discover 1/2 of water covering the entire floor. Kelty looked at me radiantly, holding his cleaning cloth in one hand, while the other manned the water flow in the sink. I was speechless. I placed Jevy in the bathtub and started the shower. It was then that I noticed the toilet had a very small amount of pee in the bottom, and was otherwise entirely emptied. With the dawning realization that the bathroom was not just flooded, but potentially equally contaminated, my resolve to remain calm rapidly dissipated. The proud helper was removed to an alternate location and frantic cleaning - and crying, which helped curb the cursing - commenced. It is also theoretically possible that I have the most sanitary bathroom in the United States, given how frequently it has been immersed in all that is deplorable and consequently given a resolute sanitation.

As I finished dressing the newly cleaned Jevy, I looked up to discover that Kelty had rather thoroughly drenched the couch with his clothes which I had failed to notice were soaked upon removing him from the bathroom previously. Kelty was promptly rushed into the shower, along with the couch.

So, as they say: all's well that ends well.
Posted by McBean at 4:00 PM No comments:

Not sufficient to conquer my hunger

A few observations in 30 minutes on this snow day indoors:

"Mama, I was dreaming that we were going to get donuts. It was such a neat dream." Hint. hint.
"Mama, I feel like I need to kiss your face." After he kissed my nose... "Do you feel better now, Paugie?" "Yes, that definitely helped."
"Mama, can you help me make a waterfall?" out of legos. You overestimate my talent, dear son.
"Here Ma!" Kelty blurted out as he proudly handed me his chewed up cereal square so that I could enjoy it, too.
Turned around to discover Madigan mopping the floor (extremely well, I might add) and Paugie vacuuming (with slightly less precision). Incredible. They are my heros!
"I think if you got a vacuum cleaner for each of your boys, Mama, the house would be much cleaner. We're a helpful bunch of brothers." Noble argument, dear boy.
30 minutes post-breakfast: "Notice that I am raiding the snack jar a great deal this morning. The dinner you served was not sufficient to conquer my hunger." You might still be confused about breakfast vs. dinner, but there are no other signs that you're only (almost) 6 years old.
"Paugie, I'm going to go out to play in the snow. Would you care to join me? It will probably be splendid. We should enjoy it before a blizzard hits." I'm not sure who's child he is. And... Nashville is known for it's blizzards. Obviously.
Looked over to see Jevy lining up his stuffed animals with their heads on a pillow and carefully covering them up with a dish towel to make certain they were warm. Then, he rescued his 3" race car with a 4" carabiner and dog slip chain attached to another 3" tow truck. The towing equipment might be a little overkill, but should be sufficient for the job.
"Madigan, where's your shirt?" "I'm just wearing my sweatshirt, because I peed on my shirt." ??? "How did that happen, exactly?" "Well, it just did. I got pee-pee all down the front." I probably don't want to know.
"Bye Dev!!!!!!!!!!" Kelton screamed out enthusiastically as we left the barn. A very loved horse, indeed.

Posted by McBean at 8:44 PM No comments:

Helpful comments, and their people 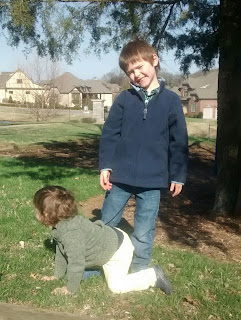 "Boy, you've got your hands full."
What I wanted to say: "Thank you Captain obvious. I hadn't noticed."
What I actually said: "Yes, I do." 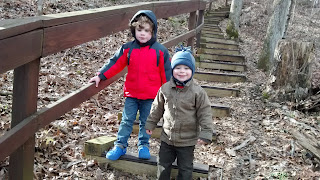 "Wow, out in this weather with no shoes?"
What I wanted to say: "Well, if I glued them onto his feet, you would call CPS, so stop complaining."
What I actually said: "Oh, where are your shoes Lochlan?" (No chance you THREW them again, is there?) 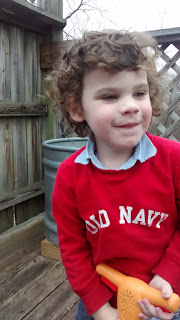 "Are you going to try for a girl?"
What I wanted to say: "This number 4 genius human sitting in my stroller wasn't some misguided attempt at getting a girl. So, to answer your question: No."
What I actually said: "When you've got this awesome pack of cubs, there's nothing lacking." 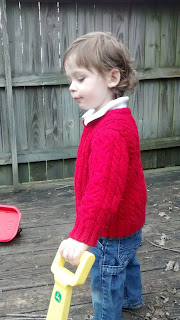 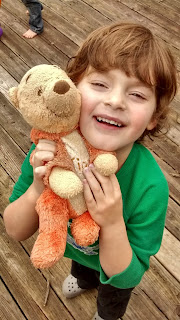 "Wow. FOUR boys??? You're brave."
What I wanted to say: "Yeah, if I wasn't so courageous, I would have traded them all in for a different batch. Courage wins again!"
What I actually said: "Never a dull moment! Our days are full of adventure!" 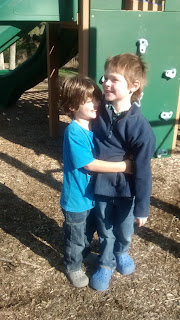 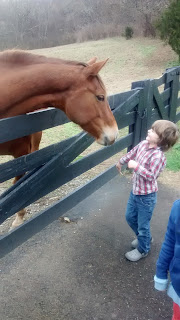 "Birth control?"
What I wanted to say: "Never heard of it."
What I actually said: "My life is 4 times more awesome." 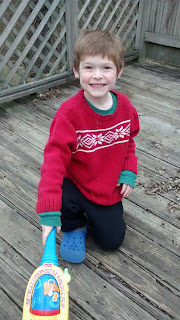 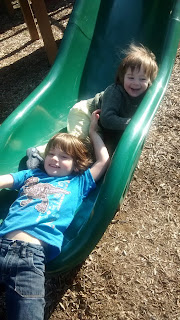 "Maybe he needs a nap."
What I wanted to say: "Four boys later and you think I would have figured that out. NOW I understand (said with a British accent, in the voice of Cate Blanchett)."
What I actually said: "Oh, you're right." 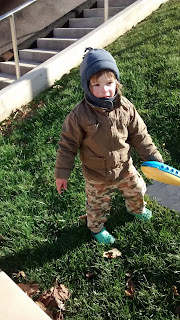 "Are they all yours???"
What I wanted to say: "Most of the time. It's complicated"
What I actually said: "Yep! Aren't they incredible?!" 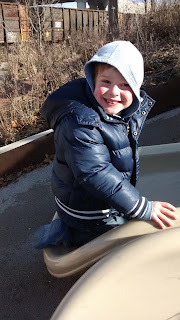 After watching Lochlan throw his shoe at the young man's feet...
"Oh, he dropped his shoe."
What I wanted to say: "Make sure you don't pick it up - hazardous materials may be present."
What I actually said: "Oh, thank you for telling me." (I would never have noticed it flying through the air to land at your feet.) 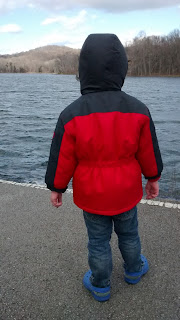 "You have an absolutely splendid family. How blessed!"
What I wanted to say: "YES, YES, YES!!! Finally someone with eyes to see what's REALLY going on here!"
What I actually said: "Thank you for that! I couldn't agree more!." 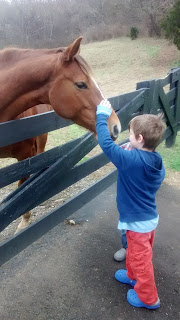 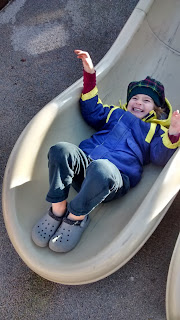 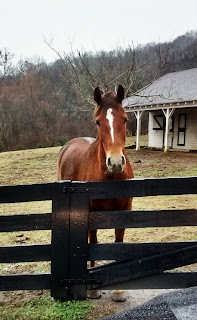 Posted by McBean at 2:58 PM No comments:

Now, I do gross things

As I scraped previously chewed dried chocolate from the window of my vehicle, I laughed - I laughed because my life is so profoundly gross now.

I started my day with dirty milk cups - a lot of them - which had to be carefully cleaned in preparation for re-use.
My mid-morning included 4 poopy diapers, delivered irritatingly close to our departure to go feed the horse that is ours to love and treasure.
Cleaned out horse hooves. With a fork. Because I had one in the car and I did not have a hoof pick. "Welcome to motherhood. Improvise."
One diaper leaked whilst we went about our shopping venture.
One hot dog was dropped on the ground and promptly picked up and brushed off by myself (30 second rule, right?) and used for human consumption.
One yogurt bite included the obvious canine hair, which was not removed due to a shortage of my available fingers.
Poo (probably canine) was found on the deck and removed by none other than myself.
Child was found wading in the toilet with a great deal of colorful splatter on all surrounding objects - I had a less-than-mini emotional explosion and vigorously and overly-efficiently cleaned contaminated bathroom.
Ate leftover mac-n-cheese - from the children's plates - for lunch.
Cleaned up dog vomit (I think).
Reached hand down garbage disposal to remove toy that had been used for testing (presumably); found all kinds of woefully deplorable items included.
Mopped my floor with a baby wipe. Because it was available.
Kids in bed - grossness temporarily paused.
Got an "eye booger" from Paugie's nose stuck to my finger, via the TV remote.

Motherhood is gross. And, spectacular. Breathtaking.

Tiny moments of sunlight that I captured and am going to try to bottle from this day:
Kelty listening to daddy blow whistles through a bottle top - his smile reflecting awe and inspiration.
As he saw me this morning, Madigan exclaiming: "Mama, you look fabulous! I love your hair like that!" I shall not shower more often.
Kelty's thorough participation in Daddy's pillow fight with the boys this evening. He kept "including me" by cantering over and bopping me on the head (or computer I was typing on) with a triumphant giggle.
Jevy grabbing my hand and coaxing me into a rambunctious game of chase this afternoon - so much roaring laughter will doubtless lead to sore abs tomorrow.
Madigan quietly allowing Kelty to steal his toy - and when I intervened, his reticence to acknowledge the wrongdoing, in an effort to save his baby brother getting chastised.
Paugie's inability to wear pants - he really tries. We compromise on shorts, but 29 degree weather just seems to warrant more. This will probably be a life-long stalemate for the Schnauge and his Mama.
Kelty screaming "Mama!" in the car, with great exuberance because he wanted me to give him one of Devany's mints. I turned around to address him with alarm displayed on my face, and his earnest demand turned into a wide smile and laughter. He might blow harder than he can push.
Jevy trying to obey and follow through when I ask him to do something. He so prefers to be a man of his own mind (and agenda) and when I press him to listen and act accordingly, his mind almost visibly smokes from the inner struggle - and when he makes that final decision to obey and breaks into a smile, my heart is a puddle and joy overwhelms. :-)

So, here's to the running, roaring, and wrestling that is life, here.
Posted by McBean at 6:32 PM 2 comments: