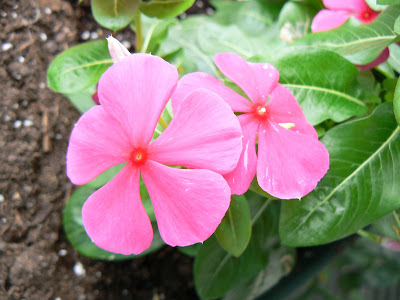 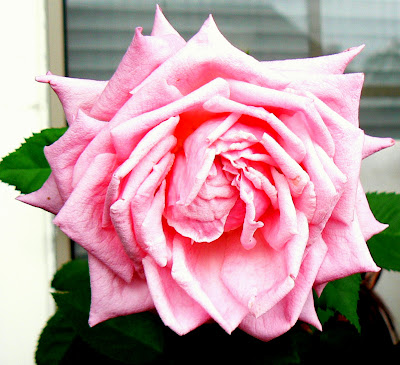 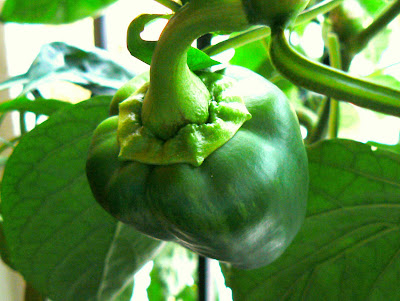 Posted by McBean at 9:47 AM No comments:

Stop and Smell the Flowers 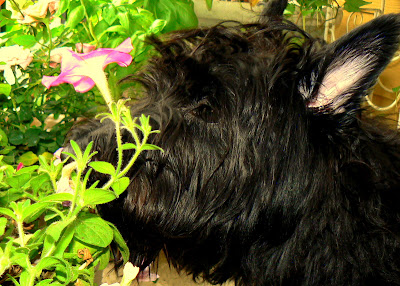 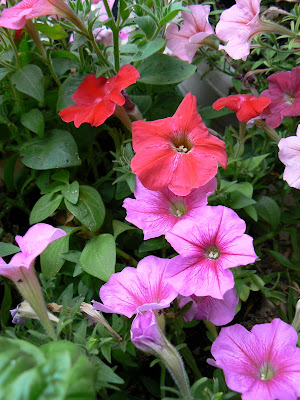 Advice from Valiant McGary.
Posted by McBean at 6:16 PM No comments: 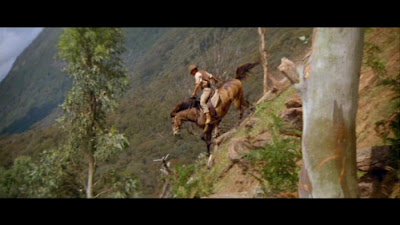 Today, we downloaded the soundtrack for "The Man from Snowy River" which was perhaps the most influential movie of my childhood. It was, after all, the first movie I remember seeing in the theater! It was definitely the catalyst for sparking our fascination with the Equine.

I think we had a fairly atypical childhood, in some ways... horses were an integral part of our lives, our imaginations were active and we had many outlets with which to express our interest in horses. We wore out two pairs of stick horses (that our aunt had lovingly made for us) and "rode" them who knows how far. In fact, at one point my parents had to tell me to stop cantering my stick horse so much, because it was hurting the "horse's" growing tendons. I was only allowed to trot for two whole weeks! :-)

Snowy River also inspired some of my more daring - and incredibly stupid - moves on horseback. I once rode our horse, Billy, straight down the face of a hill which was difficult for a person to traverse on foot. Providentially we survived without major mishap, my fantasy was fulfilled and fear was conquered.

In addition, my most favorite song to play on the piano was "Jessica's Theme" from Snowy River. It was the only song where I could get lost in the music and make less mistakes because I wasn't distracted by the semantics. I knew the scenes reflected in the music.

I realized recently, in looking through my old journals, that it was through my love and understanding of horses that I first learned to understand myself better. I always had difficulty expressing what I was feeling and thinking, but if I started talking about horses (and the things I thought about my horse), it was almost a segue into the emotional me that was slowly developing and being discovered. I wonder how many people have things like that in their lives that help them to discover and express the relational/emotional part of themselves or how many have never had an outlet for that discovery or expression.
Posted by McBean at 2:56 PM No comments:

yeah, not me... my horse! She's eating double what she was eating 3 months ago! I think she is going to have a big baby. I'll try to post recent photos of her soon. She isn't showing too much yet, and in fact I had been having a hard time keeping weight on her, until the past two weeks. Now, I'm starting to see a little "pooch" in her belly. :-)

Yesterday, after our lesson, one of my students and I spent about 30 minutes just rubbing her all over with the rubber curry comb and scratching her belly. She's so expressive and when she wants us to scratch in a particular spot, she will point with her lips (to the best of her ability, since some spots are simply out of reach for her) to help us understand her desire. If we pause to rest, she'll walk up and lay her head on my shoulder to indicate that she would be exceedingly grateful if we continued. Why is it that all my animals are so demanding? :-)
Posted by McBean at 11:47 AM No comments:

The things we value

As I pulled into our apartment complex this evening, I saw two women carrying a shelf over to the dumpster area. I (secretly) stalked them and when they were gone I trotted down to see if their junk could possibly be my treasure. :-) Indeed, I was not disappointed. I hoisted the rack onto my arms and hauled it up the unending stairs that lead to our home. It now resides outside our door as the shoe rack and because it is solid wood, stands up on it's own (unlike the previous rack, which needed quite a bit of help to fulfill its intended function)!

So, to totally change the subject... I am consistently reminded that though we each value different things, we're highly programmed in our culture. I think the more I have been away from mainstream media (since we don't watch TV, anymore), the more I'm realizing my own taste in things. My likes and dislikes have become more unique, but also well defined. I am less influenced by what others deem valuable or desired (or at least by what is portrayed in commercials). It's kinda' fun getting to know myself a little better. :-) The terrific part is that I'm starting to observe and appreciate more about my hubby too! He's swell!
Posted by McBean at 8:08 PM No comments: 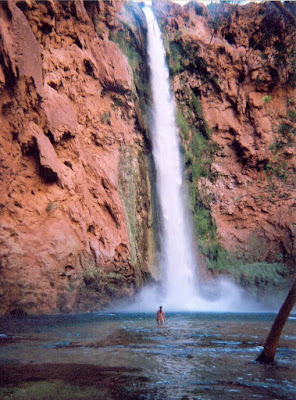 We're planning a trip down to Havasu Falls next summer and I woke up thinking about it this morning. I think I'm in that "let's go have fun and leave all responsibilities behind" mode right now. Cool, clear water, sense of accomplishment for having conquered "the hike," hot hiking food, long conversations at the picnic table, good book, invigorating climb down to Mooney Falls, hot chocolate in the mornings and sleeping in a tent next to the water. Need I mention the despicable outhouses? They make for a truly unforgettable trip!

If you look closely at the photo, you will Jess standing near the base of the falls.
Posted by McBean at 9:13 AM No comments:

So many of the people who are an integral part of my life are suffering from this reality. Some are overwhelmed and discouraged. Some are just living each day as it comes, because it's simply too painful to live, looking ahead. Some are fighting their way through, grasping for every foothold that might offer leverage.

Scripture tells us that we won't be given anything that we cannot bear. I know sometimes it seems like that's not true because - let's face it - when it rains, it pours. But, I think we must remember that it is true and we will not be left alone to defend ourselves or to pull through the mud. Let's not forget that we have each other for a reason and that even if we were all alone, we would never truly be so.
Posted by McBean at 11:02 AM 2 comments: