It's the name of a Scottish city

but more importantly, the name of a great dog: Aberdeen. This pup joined our lives a few weeks ago, and she has given us so much joy, laughter and amazement.

For the last several months I've been considering the reality that Sabina is slowing down (not dramatically, but steadily) as age begins to stalk her. She is still quite spry and able to keep up with us on most of our hikes/rides, but I've noticed some lagging on the longer adventures and she is often pretty stiff on the days following our escapades into the woods. How do you prepare yourself for the toll that times takes and for the eventual loss of the perfect dog? Well... you don't. As a family, we decided we needed to find a dog that Sabina could mentor in all ways perfect (trail manners, property management, family protection, etc.) while she still has the energy and desire (most of the time) to do so. She seems to approve of our choice in apprentices. 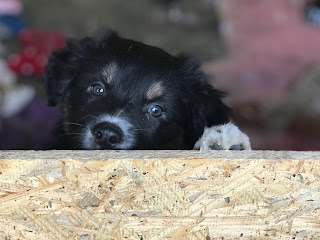 When I saw this picture of Aberdeen, I knew. It was her eyes - all that is behind those eyes - that caught me. She says everything with those eyes. She's intelligent, observant, sensitive, absurdly fun to train, and she's smart enough to question things, but not beyond reason. She's bold - she's MOSTLY not afraid of the horses anymore, though she's smart enough to read Devany's cues that Aberdeen is not welcome in the stall. :-) She knows that a coyote howl means it's a good idea to stay close to Mommy, even if your bones are telling you to run to safety elsewhere. 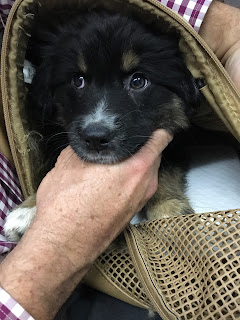 PJ Moose is completely in love with her. She adopted her as her very own baby, but she treats her like a big sister should. She plays with her all throughout the day, but has maintained enough authority to tell Aberdeen when enough is enough and it's time to be a nice, calm dog, with soft white teefies safely closed within one's mouth. :-) Aberdeen has inspired Paisley to consider the merits of obedience and (dare I speak such blasphemy???) compliance. 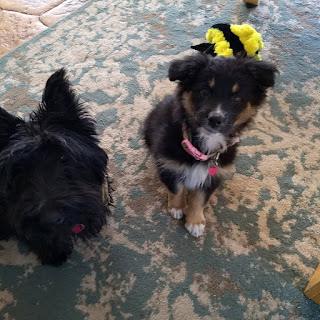 "Deeni Bear", sharing a chair with J. Moose, in spite of the "No dogs on furniture" policy. :-) 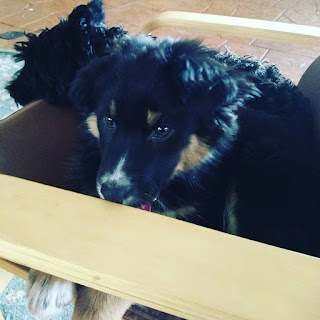 Paisley has also introduced Aberdeen to some of the finer things in life, like horse turds. Navigating sweet puppy kisses through turd breath is always an adventure. 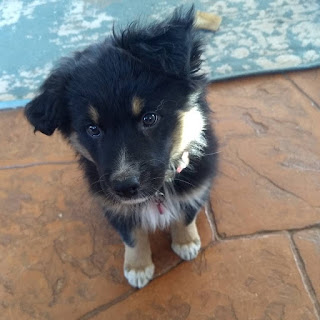 There are endless things we have yet to explore and I'm so excited that this beautiful creature is part or our family and alongside us on this journey! 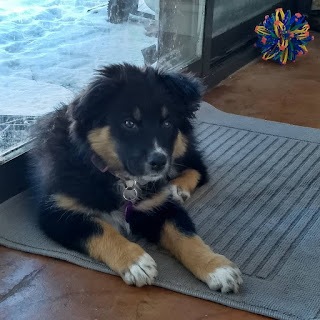 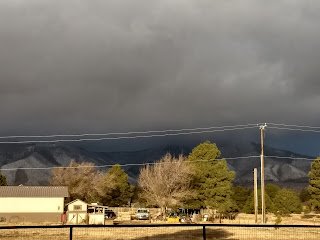 The storm rolled in atop the Peaks as I watched, mesmerized by the beauty and brooding nature of the beast. My view of the mountains was quickly obscured by the thick bank of snow, and soon even the nearby surrounding hills disappeared into the mouth of the storm. As flakes began to fall in earnest around me, I considered how reminiscent the storm is of the storms I allow to overtake my thoughts, and quickly my day, and even my joy, at times. Not unlike the storms that shadow the Peaks, the storms that shadow my heart come from many directions and often without a great deal of warning. The beauty of the mountain storms is coupled with the danger, but, in contrast, I find the beauty in the storms of my own life to be nearly obscure, unless perhaps in hindsight. 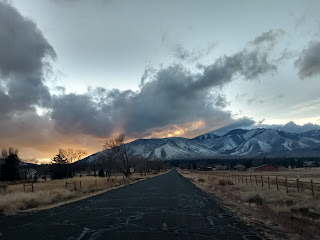 Today, as a storm was built out of a frustration stacked upon frustration, spilled milk, a task list that remained elusively incomplete, canceled appointments, and unmet expectations, I knew danger lurked. When the very large jar of hand soap splattered onto the floor in an array of tiny glass shards, the building storm erupted in volcanic fashion and my children were the hapless victims of it's wrath. I administered an emphatic explanation of why carelessness is a deplorable wrongdoing, in a considerably escalated volume and with far more energy than was strictly necessary - okay, I went totally overboard, and yelling happened. The eldest of the small humans (who hold my heart) withered into a puddle while maintaining stoic resolve to hold himself together and be strong in spite of his mother's most overwhelming state of being. 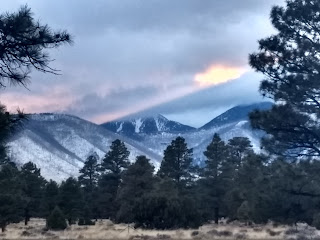 As I looked at his strength holding him together as his joy crumbled in (self) disappointment, the storm inside me disappeared and was replaced with horrifying sorrow. I stepped across the heap of soap and glass oozing across the floor, grabbed that tender human into my arms and let him sob into my chest. I told him how incredibly sorry I was for unjustly hurting him and for thrusting him into the eye of my storm. I asked him if he would please grab me, hold me firm and remind me in those moments of tornado pressure to stop, breathe and remember that I am responsible to make the right choice, just as I frequently remind him. He asked me why I still have problems "minding your temper" even though I'm older and understand more. I reminded him that I am a fallen creature capable of much naughtiness and capable of much good, just like him. His whole face smiled as he said, "So, I am going to need to remind you to behave when you are making bad choices. You can do better, Mama, and you'll be happier with yourself  when you're a really old person if you do better now." Yikes. Good thing I've got four (well, five, if we start from the top, with Daddy) holding my feet to the fire (even if it burns them, sometimes). I'm a lucky girl. And. I. Know. It. 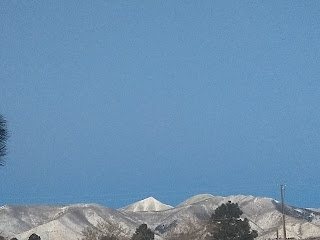 Disgruntled with his mother - again - Madigan sat down heavily and sighed. After a few moments of consideration, he said, "Well, I think I'm going to have to move out." I tried - I really tried - to force my face to reflect the somber mood that was appropriate to his frame of mind, but in my epic failure to do so, I turned away and asked, "What????!!!! Why?" Following a thoughtful pause, he continued: "Mostly, it's the sleeping arrangements. Paugie can be snarky at night and his overall attitude discourages me from sleeping." Yeah. Right. "Where will you move?" I pressed. "I'm thinking I'll move into the field, or perhaps the hay shed." Still struggling to keep my smile in check, I said, "Hmmm. Well, it's a worthy consideration if you're really frustrated and need some man time."

I assumed the notion was a fleeting one, after several days with no further mention of it. This morning, after his mother exasperated him yet again with her unreasonable demands (that he and his brothers clean up the mess they had made), he announced to Daddy and me (during our morning tea) that he had decided to "expedite my time frame on moving out" (his words). "I was originally considering making my move in a couple months, but I've decided that I'll do it in a couple weeks." I (helpfully) suggested that if he was already expediting it, perhaps he should move out today. He emphatically agreed that if I would help him set up his tent, he would be moved out by this evening. Though his original plan was to erect his new home in the horse pasture, I was able to convince him that the pine tree (right by the house in the backyard) would offer lovely shade for his afternoon solo reading time, and he agreed it was, hence, the preferable location.

He assured us that moving out would help cool his irritation. I (helpfully) suggested that it was quite likely to freeze his irritation (with the temps well below 32 degrees F.). He moved all his nightly belongings (and a couple favorite books + lanterns) into his new house and christened the home by successfully taking an afternoon nap in there. He informed me upon his post-nap return that it was helping him to be a man and think like a man.

As the darkness engulfed our evening and the chill in the air began getting a firmer foothold, he boldly claimed that he was ready and exited to the great unknown. 23.5 minutes later, he confidently strode back in and stated that it was "actually rather disturbing out there, all by myself, with the coyotes howling. If the silence wasn't so obvious, it would have been easier." Oh, you wise man. No shame in being sensible and in finding comfort in what you know to be true. :-) This man is intensely... everything that he is. I just stare at him all the time, in absolute awe and persistent delight.


Showing his brothers his new digs. 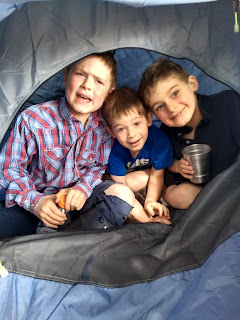 The man and his belongings ready for departure. 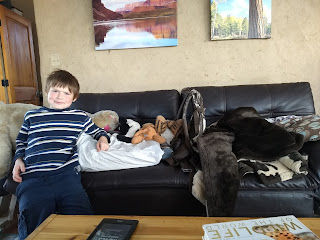 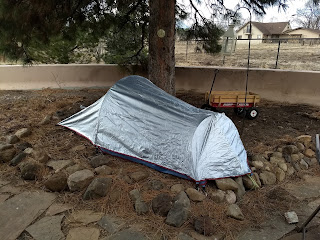 Where the wild things grow... 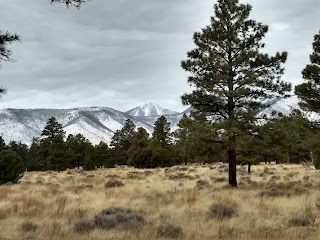 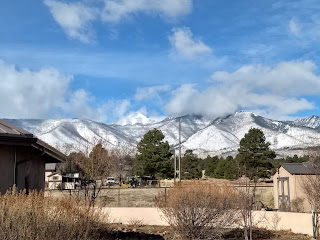 ... is solely mine to be known and to be reckoned with


The isolation... that's what compounds it all for me. Even when I'm surrounded by people (often who know me and love me well), I feel alone and unknown. I feel like the deep(er) pain in my heart is solely mine to know and to be reckoned with.

It's a voice trapped inside a boy that my heart covets. It's an inability to free what is trapped and longs to be free. It is my captivation when I see the heart behind those blue eyes and the joy dancing at the surface. It's wanting you to know and be known. It's the inexplicable pain of feeling like the all of you I see is lost in the eyes/perception of others (a sight I have been graced with because I've had the benefit of years watching you, being changed by you). It's the fear of knowing this (awful/wonderful) world and wondering how I can prepare you for it when I can't communicate with you. It's the insane joy I feel when you try to show me yourself, through your creativity, or an attempted word, or a wonderfully smothering embrace, or when you look at me with that smile and just dare me not to feel your delight and revel in it. It's the hope deferred, time and again. It's the hope given in the most unexpected places. It's so desperately wanting you to see all that I see in you. It's yearning for you to know as surely as I know that you are the incredible, the beautiful, the complex, the purposefully created. It's wondering if I am sufficient for the task ahead - of loving you as fully as you deserve to be loved, of teaching you all that you need to prosper, of finding the strength to give to you when you need it most from me... of not failing you where you need me most.

Fear. Hope. Pain. Worry. Wonder. Exasperation. Longing. Doubt. Faith. Ultimately, it is faith. Faith in what (WHOM) I know to be true, right, good and then trusting that even though I so often feel alone in this, (in mothering you, beloved and marvelous human), I am not. The road ahead is not yet known, but the journey is ours to take.