As we made our way down to Costco, Madigan started doing the "potty dance" in the backseat - usually gives me a minute-by-maybe-two-minute window until unwanted activities result. As we careened into the parking lot, I frantically scouted out the most secluded parking spot on the lot, whisked the boy out of his seat and helped him take a leak in the parking lot. My shoe was the only casualty in the event, but that's certainly not a first. So, with wet shoe on one foot, one crabby baby, one fitful 2 year old and one hungry 3 year old loaded into the shopping cart we headed into Costco.

I handed Madigan a yogurt sample and after putting the first bite into his mouth, he choked (to say he was grossed out by the flavor would be putting it mildly) and proceeded to vomit down his shirt, onto the floor, across my pants and over my clean shoe. As I attempted to remove Madigan's button-down shirt, Lochlan started screaming in protest to being in the basket, relatively ignored. In an act of sheer desperation, I handed him my keys with the sincere hope that it would entertain him long enough for me to finish the (disgusting) task at hand. Lochlan wistfully tossed my keys under a nearby display - perfect. Thank you, cherub. After successfully removing the puke-covered shirt and retrieving my keys from the obliging display, I headed to the clothing section to see if I could find a sweater to fit the half-naked boy sitting in the cart.

As I hunted for ANYTHING that might fit, an elderly woman stopped to smother the boys with adoration and upon discovering that Madigan was shirtless, proceeded to inform me, "Honey, it's too cold for him to be without a shirt!". I explained why I was currently scouring very large sweaters to find something suitable and she finished her admonishment by exclaiming, "Honey, your child should be at home if he's sick!". Dully noted. And, Granny, if my child was sick, I would be at home, I can assure you.

Sweater procured and fitted onto the boy, we headed toward the checkout, at which point Declan decided to hang his head out of the cart and whack it against an obtrusive pole in the middle of the isle. As he wailed in disbelief that I had allowed such an incident to occur, another helpful lady walked by and said, "It only gets worse." As I tried to formulate a response, she followed up with, "I'm so glad mine are all gone." My attitude had admittedly been spiraling at a progressive rate, but when she made that comment, I stopped the cart, looked at my three incredible little men and thought to myself, "I'm so glad you're in my life. I'm covered in throw up and and pee, but I wouldn't trade this day with you, for anything." My previous frustration (and escalating blood pressure?) was replaced with contentment and thankfulness for these days I'm given.

I wish I could say the challenges ended there, but alas... this is life after all! I decided to get a piece of pizza for us to share on the way home and as the employee handed the pizza to me, Lochlan snatched it off the plate and promptly lost it to the floor. The employee didn't hesitate to offer me another piece, much to my gratitude. After buckling the hungry chaps into their car seats, I glanced over the receipt and realized that they had failed to scan the tag for Madigan's newly obtained sweater. I re-loaded the protesting crew into the cart, and went to the returns area to explain what had happened. The lady looked at my disgusting pants and my starving children and said with a wave of her hand, "It's on the house. Go home." You are my new hero, Costco employee!

On the bright side, Costco shopping outings can only get better from here! Right???
Posted by McBean at 12:15 PM 4 comments:

While standing in the kitchen, I overheard some curious chatter in the front room. When I peaked my head around the corner, I saw little "Jevy" standing against the chaise lounge chair, leaning into his big brother, with giggles bubbling out of him. Madigan was patting his back and saying, "I love you, I love you, I love you, Lochlan James." Later, I overheard the big(gest) brother trying to comfort a distraught Pauge, by reminding him: "I love you, Paugie. Don't cry." And, then, as if I wasn't already practically diabetic from all this sweetness, he held up two fingers (his attempt at "I love you" in sign language) to me from across the room. I'm toast... utterly smitten.

Watching these boys interact with one another and grow in their understanding of each other and the world around them is truly remarkable - I'm constantly learning! Of course, they have their ever-so-human moments periodically throughout the day, and benefit from the reminder that life does not revolve around any one them, whether or not a favorite toy is at stake. However, what keeps me constantly marveling is their sincere love for each other and trust in one another. They want to spend as much time as they can, together - there are so many more adventures to be had in the company of one's brother!

And, in adding to this pack of wonderful, small (not for long) people, here is a photo of our beloved Baby Mac #4, for any of you who might have missed our previous announcement. This photo was taken at 12 weeks, and our next scheduled "sighting" will be next week, when we are hoping to discover if Mommy is outnumbered 5 - 1 or 2 - 1. :-) Stay tuned for more headlines on this special feature we're adding to our family! 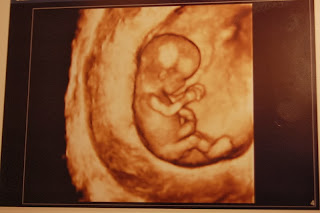