you grow up so fast... I wish I could pause time, savor the sweetness of the moments spent with each one of you, but I know I have to relish them here and now as they are given to me (in what seems like fast forward).

Lochlan: you walked around the house today holding onto one of my hands and you couldn't wipe that proud smile off your face. You kept looking up at my face to make sure I wasn't missing any of your awesomeness - and I wasn't! You may not be confident doing it all by yourself yet, but you're a walking master! When you come to me or Daddy each day and lay your head against us just wanting to be held in a quiet moment (when we sometimes steal some pretty yummy kisses, that's true), we know how special that is and we treasure every chance we get to hold you in those moments. Your quick smile and deep laugh sets the whole household to a different tune. In the morning when I hear your voice, my heart skips a little beat, because I can't wait to see you!

Declan: last night during (seriously post-bedtime) snuggle time, I started talking to you about "this and that". You put your finger to your lips and said, "Shhh, Bundle is sleeping". Then, as I laid my head next to yours on your pillow, you placed your hands on my cheeks and said, "I love you so much, Mommy". The instant tears in my eyes were from overwhelming joy - you melted my heart in that moment. After laying next to you for 10 minutes or so, while you whispered about "this and that", I yawned. You wrapped your arms around my neck pulling me as close as you could and said, "Mommy, you're so tired". Then, you shut your eyes and "pretended" to sleep (with arms still wrapped tightly around me), so that I would take my cue to close my eyes and get some rest. Oh my word...

Madigan: This afternoon, you headed to the bathroom, and paused at the gate to turn around and say, "Mommy, are you sure you don't want to come?" When I assured you that I was going to stay in the kitchen to finish making the cookies you had requested earlier, you said, "Alright then, Mommy, I'll be back in a bit." I think perhaps it was the British accent that made your comments utterly delightful to me. Then, when I sat down on the floor to stretch out my sore muscles, you meandered behind me, wrapped your arms around my neck and laid your head on my shoulder. You are so much my action-man, always on the go, always finding a way to "do" something and when you take those little pauses to love on your brothers, your mommy and your daddy, they mean more than you will ever know.

Baby K: Your consistent poking, kicking, hiccups, bouncing and jostling makes me so excited to meet you. I know you're getting anxious for some more leg room, but just hold on little buddy - only a few more weeks to go. When I came home from the midwife last week, your biggest brother said, "Mommy, did you bring Baby K home for us today?" We're ALL excited to finally get to hold you!
Posted by McBean at 8:22 PM 1 comment:

I need a spare (brain, key, me). Yesterday was confirmation.

With George out of town, chaos always runs a bit more rampant, so I knew to expect some crazies in our household. So, when my friend, Elizabeth, and I headed out to make a run to Trader Joes, feed Devany and get our "fix" at Starbucks, I knew it wouldn't go without a hitch, but I was confident that we could handle it.

The 29 degree temperature made feeding Devany a rather miserable undertaking. I think the other horses in her pasture had bribed her to eat as slowly as possible just to make me miserable, but nevertheless we waited for her to finish every morsel of yumminess in her bucket. Meanwhile, Paugie "had to go potty" so after his first (and, given the role that horses are likely to play in his life, probably not his last) successful potty-in-the-stall move, I carried him to the car, so that we could wait in the warmth with his bros and Elizabeth. He proceeded to pitch a masterful tantrum, clawing at the window, throwing us his head into his carseat, screaming as only a tortured soul can and throwing his milk cup at my head. Mysteriously, I did not find this outburst inspirational enough to let him return to the freezing cold barn where he preferred to be, so off to Starbucks we went.

When we arrived (12.5 minutes after Paugie's previous potty break in the stall), he had peed in his pants/carseat (perhaps the fit of rage had contributed???). As we maneuvered him to the back of the truck for an outfit change, Madigan began frantically announcing that his bladder, too, was on the edge of explosion. Elizabeth finished re-dressing Paugie while I snatched Jevy out of his carseat, placed my keys in my purse and reached out to help Madigan out. While holding Jevy's 38 lb. mass, I decided it might behoove me to leave the extra weight of the purse behind, grab the credit card and run into Starbucks before boy #1 had a bladder explosion. As we walked through the door of Starbucks, I realized in horror that my keys (and my cell phone, my carseats, my brain) were safely locked inside my truck. Awesome. After potty break number 2, I used Elizabeth's cell phone to call Susan - miraculously I actually remembered her cell number! Because she's a saint, she dropped everything she was doing, rushed over to pick up Elizabeth so that they could try to locate the extra set of keys that I felt sure George had left behind while he traveled to CA.

Since I knew the boys would last about 4.25 minutes in Starbucks, we headed over to the neighboring grocery store to do some "shopping" while we waited for Elizabeth and Susan to return with the keys (we hoped). Paugie announced that he had to go potty as soon as we walked in the door, so after wrangling them out of the shopping cart I had just wrangled them into, we all 4 headed into the bathroom where Madigan went (again) and Paugie stated that "it won't come out". So, pants back up, baby off the floor (it's IMPOSSIBLE to help a 2 year old with his pants while simultaneously holding a wiggly 38 pounder on an 8 month pregnant tummy), all hands washed and then back into the cart. Jevy only pulled 8 bags of potato chips off the shelf while I loaded boy 1 and 2 into the cart, so mission accomplished. Off we went in search of (my sanity) and lunch. We meandered slowly throughout the store, trying to kill time, and once we were at the very back corner of the store, Paugie announced that he had to potty again. I think I rolled my eyes and sighed in exasperation, but I bit the sarcasm on my tongue and headed toward the restrooms (again). As I removed Paugie from the cart (again), his foot caught and he lost his shoe. Because I was removing him one handed (still had the 38 pounder in the other hand, at this point) I placed him on the floor so that I could reach for his shoe and help Madigan out. He ran one-shoed for bathroom and after a successful mission (on his part) we re-washed everyone's hands + one foot and I carried Paugie and Jevy back to the cart.

After discovering (through a great deal of searching effort, followed up with a phone call to said hubby) we discovered that George had the spare key in CA. So, we called a locksmith (which will be my FIRST action choice next time I lock my keys in my car, with 3 - oh, wait, 4 - little potty makers in tow) and successfully got my vehicle unlocked. After one last potty run for both boys (NO MORE VANILLA STEAMERS FOR YOU PEOPLE, EVER!!!), we buckled everyone in, nixed Trader Joes from our schedule and rushed home for much-needed-naps (and another potty break or nine, to be sure).

This life = sweet chaos. I wouldn't trade it for anything.

And, for the curious, here is the adventure station (boy's bedroom) in our house: 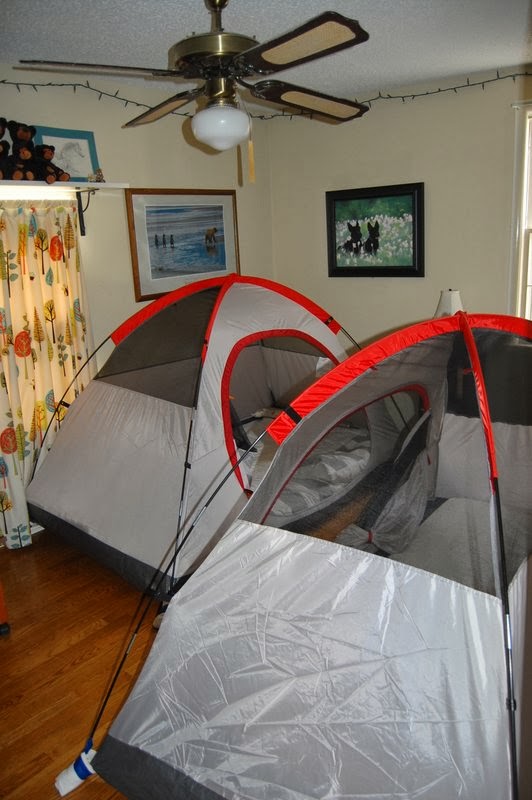 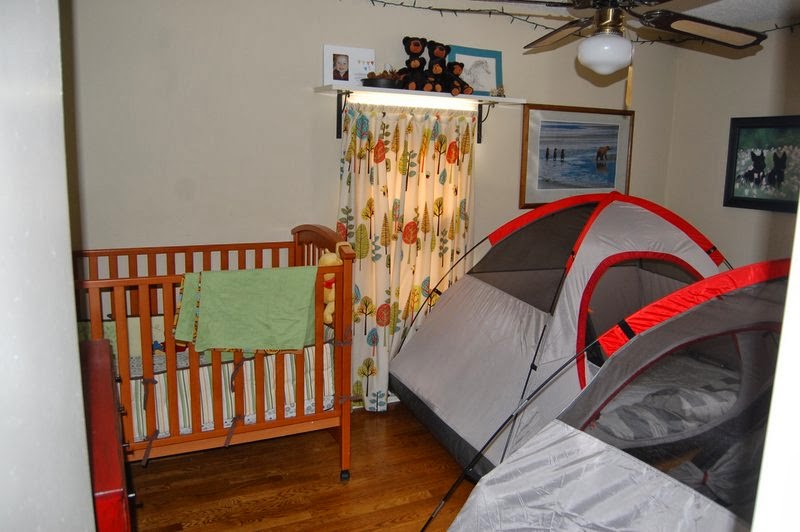 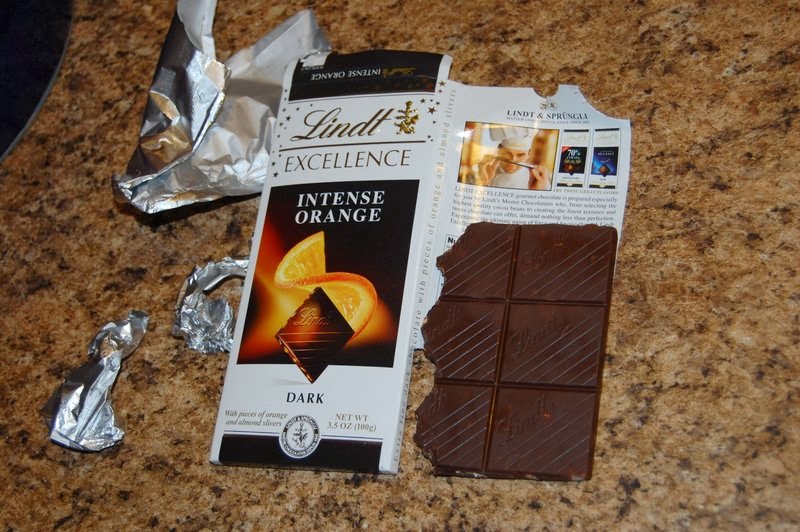 "Mommy, Paugie and I are feeling better now." Madigan's announcement as he handed me a significantly devoured (delicious) dark chocolate bar this evening. My worst nightmare come true... 30 minutes before bedtime.

"Bedtime" (we use the term loosely around here as it has various alternate meanings for each member of this household, it seems) has been something of a trial since Thanksgiving. The three cherubs were sleeping through the night without a hitch until the night before Papa Ross' funeral, when "Jevy" toppled off a chair and suffered a concussion. Though Jevy was fine, within a few hours and after thorough examination by Vanderbilt hospital, it rattled our second-born terribly. I'm sure the stress of that previous week (numerous house guests, Daddy's absence, Papa Ross' passing, etc.) was the setup for the perfect storm, but our sensitive Paugie not only stopped sleeping at night, but started climbing out of this bed/crib all night long. After 3 weeks of no sleep, I purchased him a tent to sleep in at night and by the following week, Madigan also acquired his own tent. The boys room has turned into an outdoor adventure, and the sleeping issues have (for the most part) taken a little turn to everyone's satisfaction.

My boys are growing so quickly, I'm almost afraid to sleep at night for fear of what I'll miss. I've realized, recently, how much my words/tones/attitudes affect them. They are all quick to forgive and overlook any offense on my part, but I can discourage them faster than anyone/anything, when I'm not careful. A gentle word or response on my part turns away frustration and wrath on their part, instantly. I've been concentrating on being QUIET when I feel frustration brewing at the surface - waiting to respond when my emotions are not festering. I don't want these little critters to fear their mistakes (which are most often unintentional)... I want to encourage them to know what is right (i.e. sharing a toy is better than hitting baby brother over the head with it when he tries to "borrow" it) and though that will often mean helping them understand the consequences for those actions, I don't have to belittle them in the process, with my tone, inflection and frustration. They are each spectacular creatures and everyday I'm amazed by what I'm learning from them. I am anxiously awaiting the arrival of Baby K (Baby #4) as I cannot wait to meet him! And on that note...

Ankie Tae (Krista) was getting ready to head back to Austin after visiting us over Christmas and told Madigan: "I will be back in a few weeks, when Baby K is supposed to come." Madigan thought for a minute and then said, "Can Baby K come out now?" The red head has a special thing for his Ankie Tae.

Lastly, but not leastly by any stretch... Paugie potty trained HIMSELF 5 weeks ago. I think George and I might have put it off indefinitely with one valid excuse after another, but the little man decided it was time and did it on his own in 2 days, with a less than 3-messes quota. Another genius in our midst! 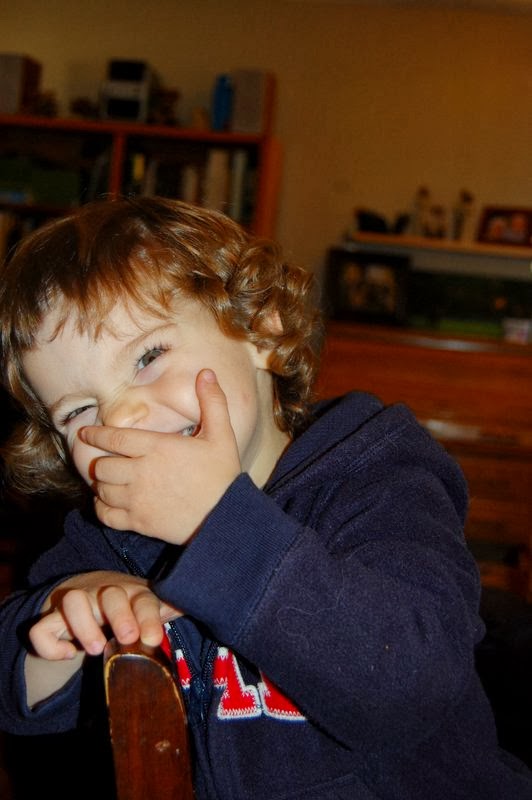 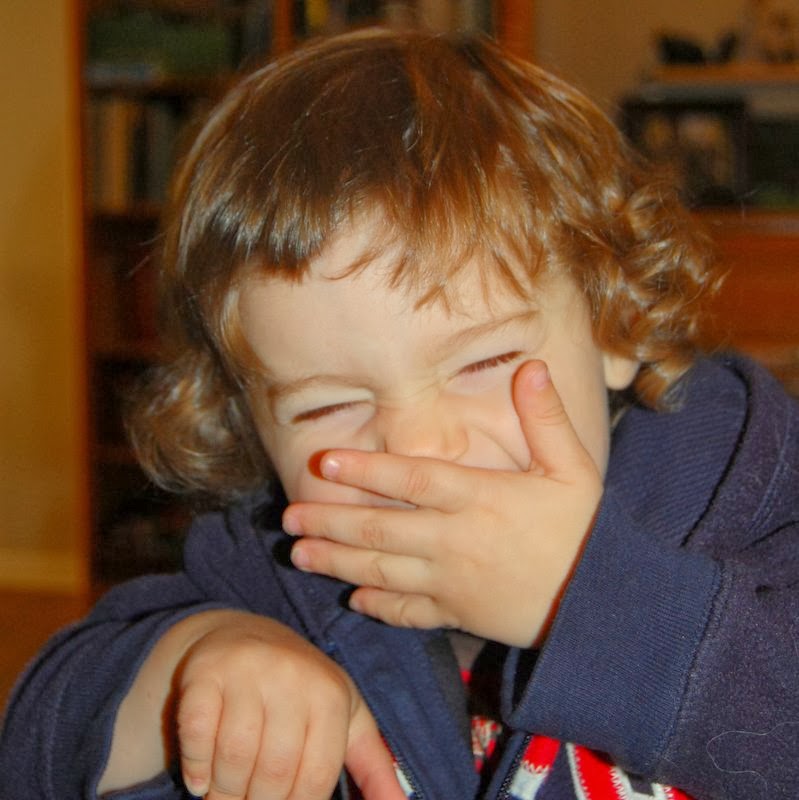 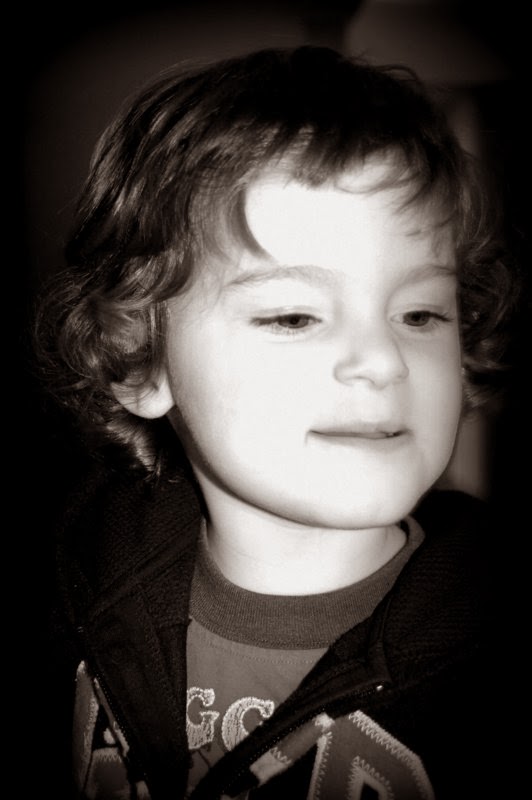 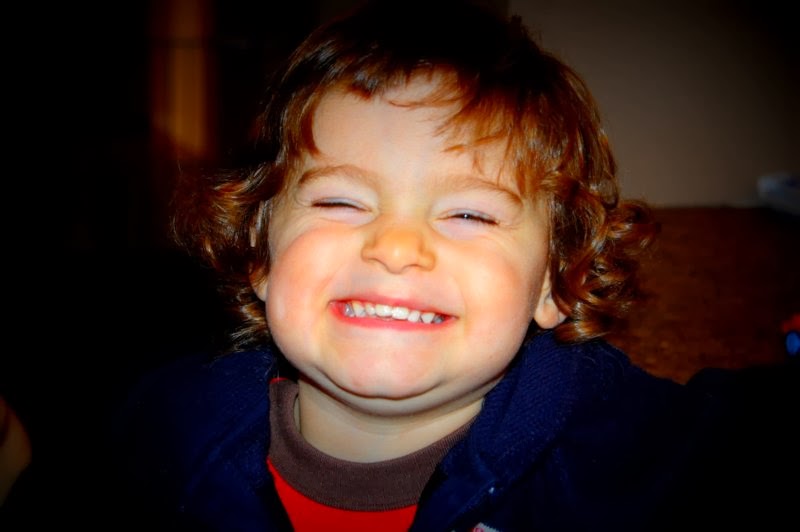 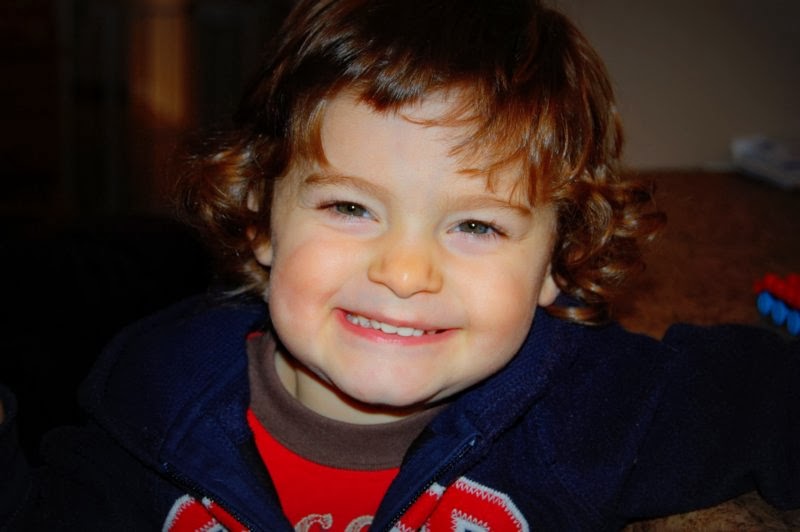 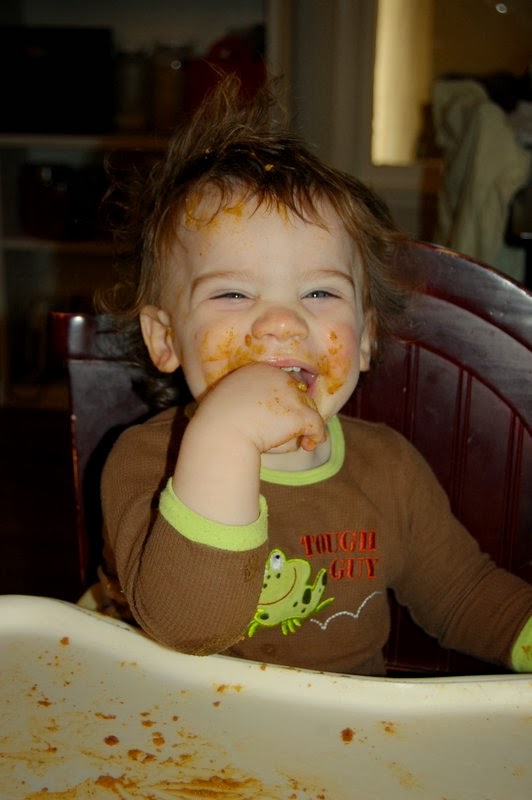 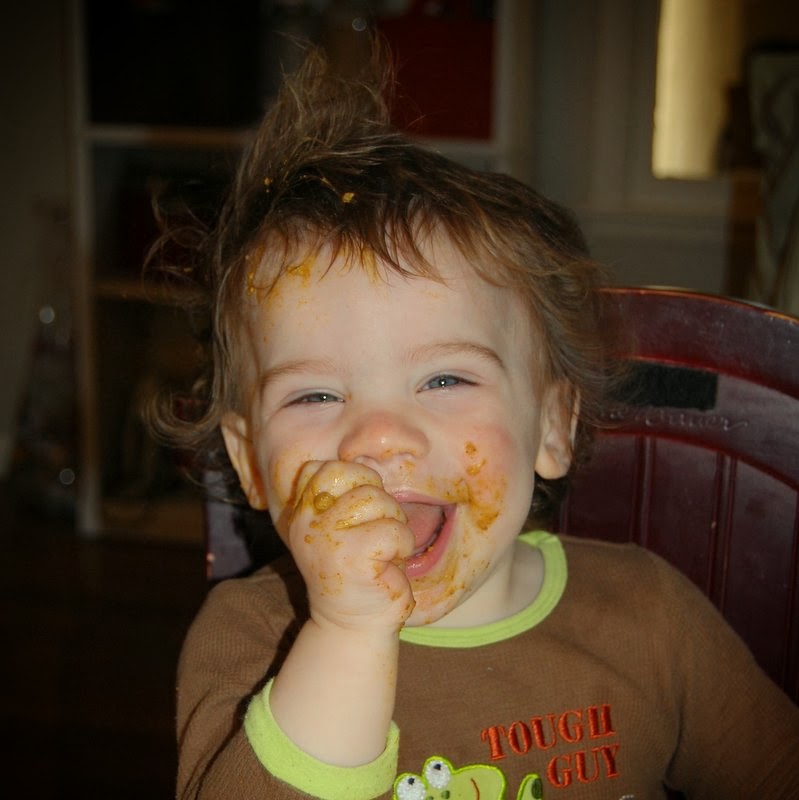 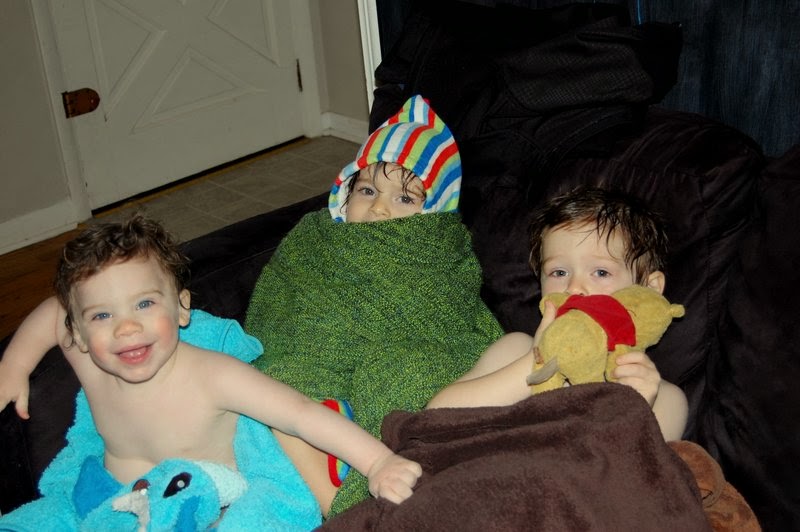 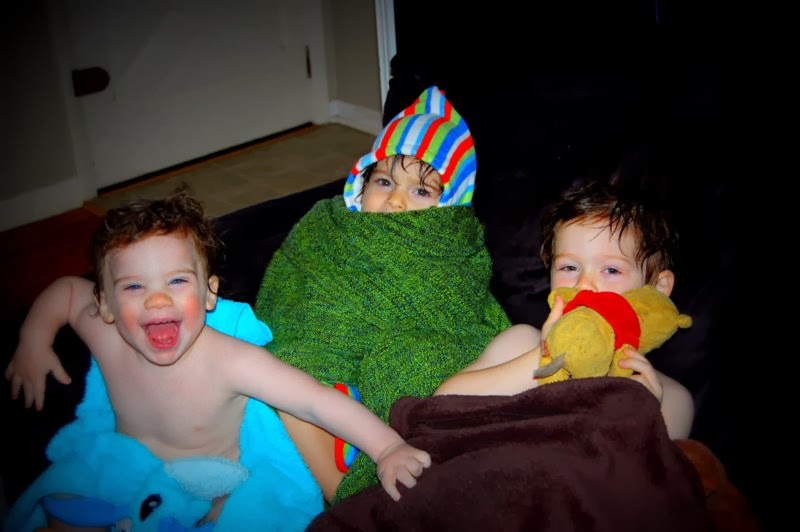 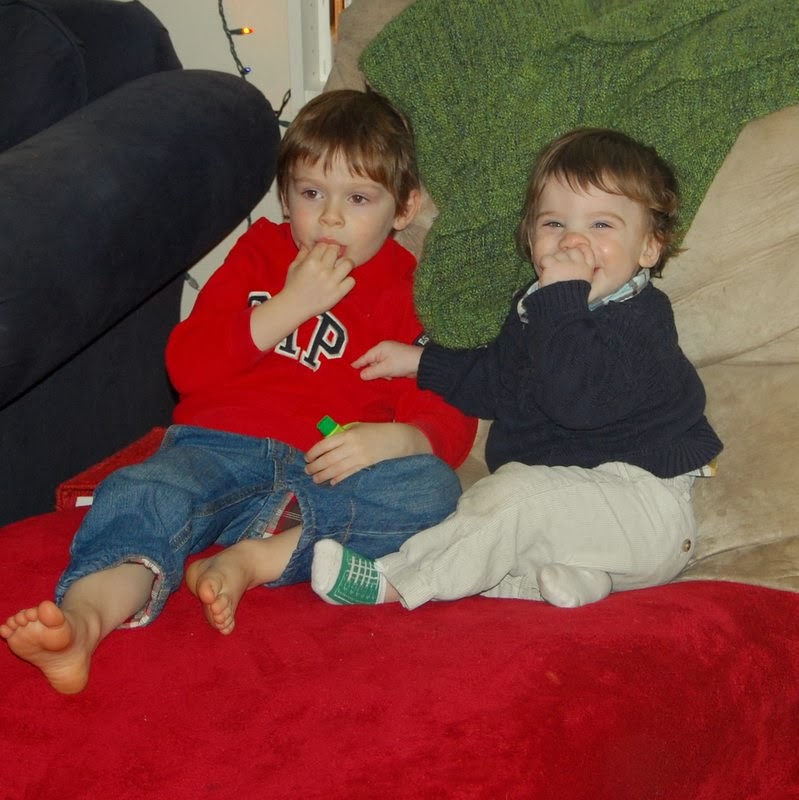 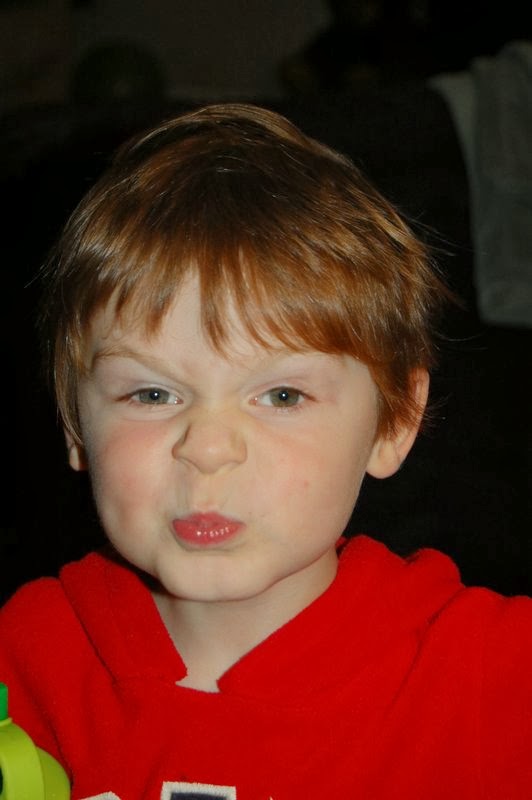 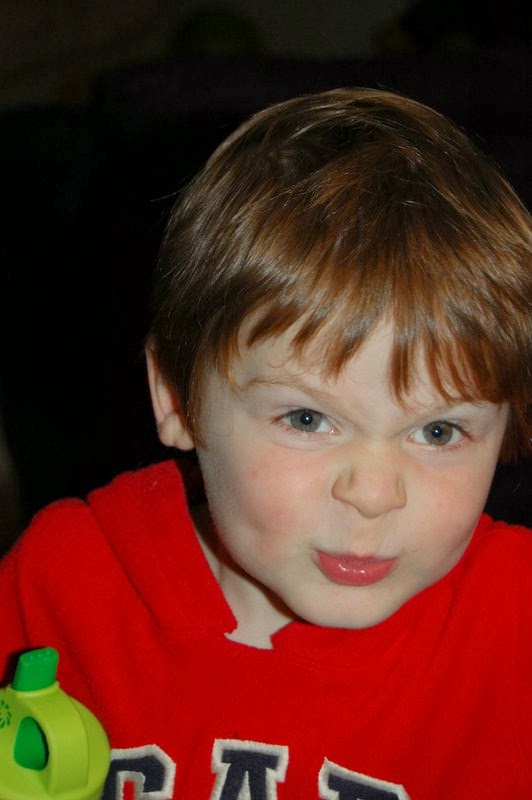 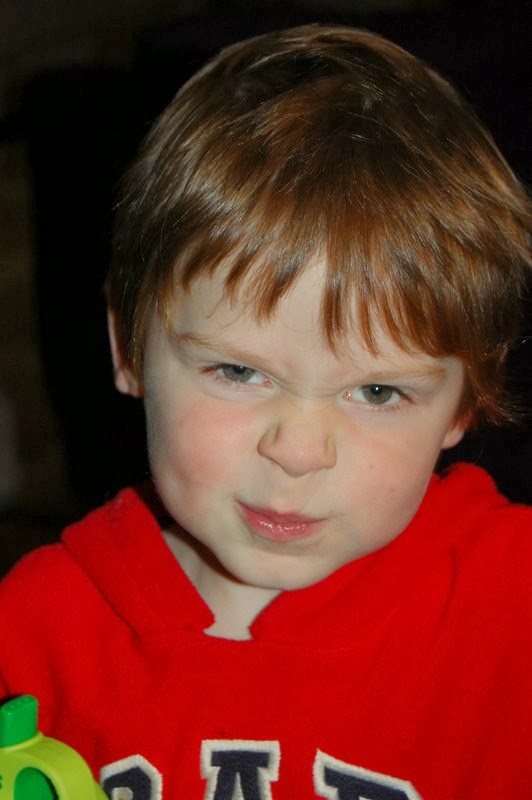 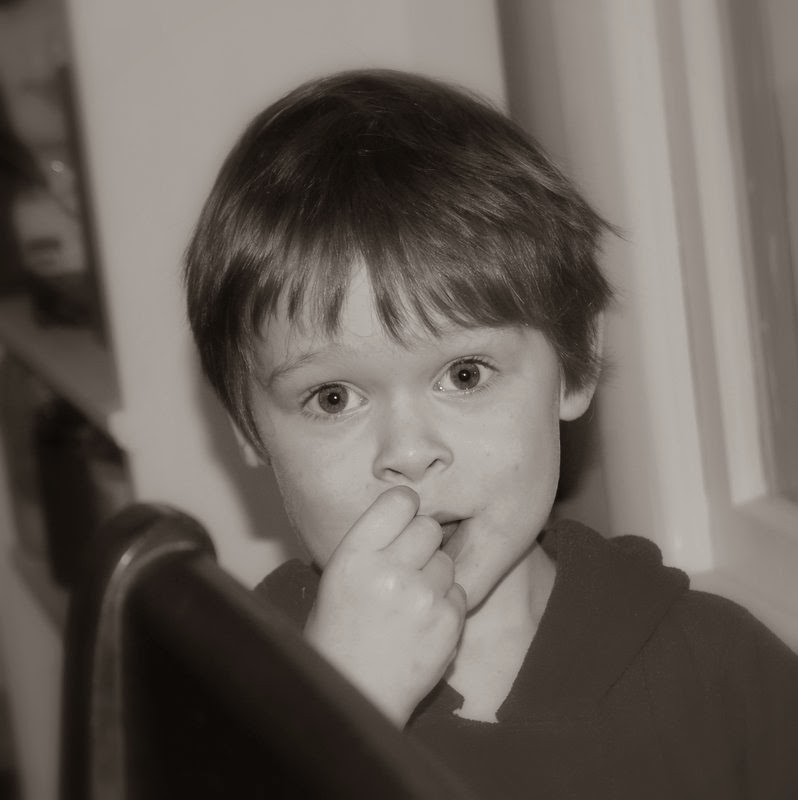 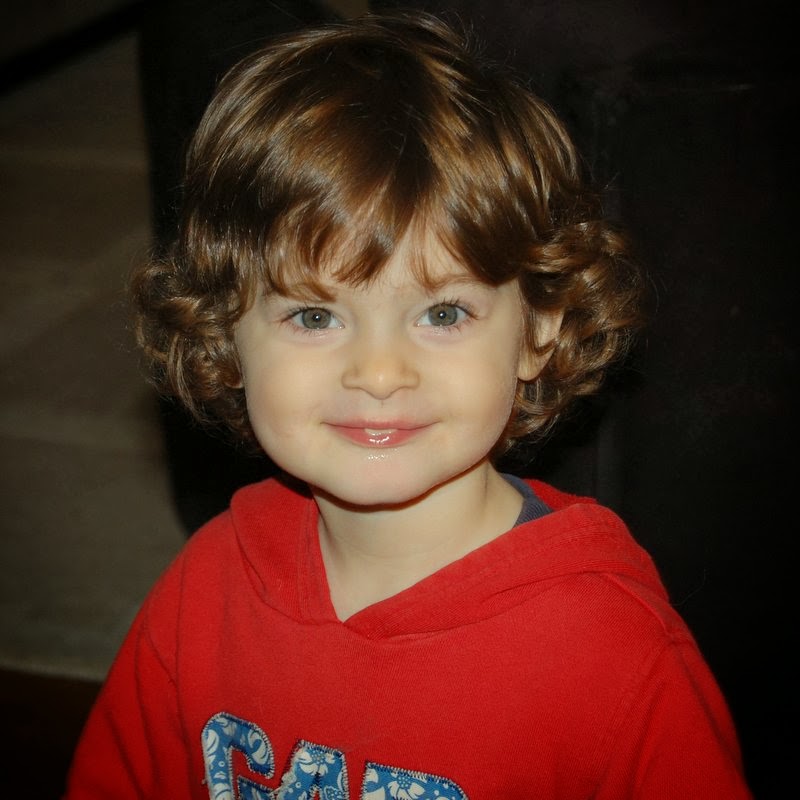