Adventure of an Equine lifetime...

I found a sorry looking apple in my fruit basket and set it aside to give to Fancy tonight... then I crumpled into tears.

After agonizing for months about what might be best for our whole family during this crazy season of our lives, I made a decision about how best to utilize my horses over the next 3 years (you know, once my kids are all walking and "hopefully" potty trained).  I offered to loan Fancy to Take The Reins, an amazing therapeutic riding program in Thompson's Station, TN. They came out to meet her 2 weeks ago and loved her (I would tell you, "what's not to love?"). She will be a part of their program for up to 3 years, at which point she will be retired and returned home to this very happy family, or reevaluated for additional time. What an opportunity for a special horse to touch the lives of so many who might need her...

So, hence the tears and apple scenario from earlier. I am honored that my horse would be considered for this program, but I will miss her every single day, with a vengeance. I must focus my energy on Devany, who inherited all the best qualities of her mother. I am excited to take this very talented, raw equine and train her the things I taught Fancy... and then pray that she will live up to the standard of a particularly great horse I know.

I have included a bit of a "picture gallery" of Fancy's life alongside my own over the past 16 years. I look forward to adding more photos when my boys start learning to ride on her!

She was a part of my life in Arizona (where she was born), then Virginia Beach, then off to college in Tennessee, and next to Maryland when George and I got married, then Austin Texas, where we lived for 7 years (and where she had her first foal, Caspian), and then finally to Nashville where she had her second foal, Devany and where I had my first 2 kids (+ 1 on the way). We have shared so much of life together! I apologize that the photo quality on some of these is horrible... 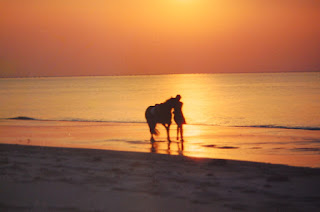 Tiger to Tyrant in one dramatic leap

Every day living with a Tiger can offer it's challenges, but I would TOTALLY PREFER it to living with the tyrant who replaced the Tiger today. I don't know exactly when the tyrant took over, but it was somewhere between the barn and Trader Joes. He starts demanding chocolate chips (it's not exactly a part of our every day meal routine, but today it was expected). I remind him that chocolate chips were not on the menu, as we walked into TJs and then loaded the monster into the shopping cart, next to Pauge. Next thing I know, Madigan has dissolved into a hysterical fit and is pawing at Declan as he attempts to get himself removed from the cart. Declan's face gets scratched in the process, resulting in instant tears. Now, everyone in the store has stopped to look at me, with either pity or resentment. Though I am finally able to calm Declan, Madigan is still angry and every time he sees anything he thinks he MIGHT want (cereal bars, chocolate chips, graham crackers, Kefir, raisins, Mac N Cheese, apples, applesauce, frozen burritos, juice and yes, even shampoo) he starts hurtling himself about the cart, yelling loudly. I think to myself, "never in a million years would I have thought that MY child would act like this... I simply wouldn't have stood for it." Now, in the moment, however, I find myself somewhat helpless to remedy the situation my personal monster has created for us all to endure.

Out to the car and now begins the challenge of extracting everyone from grocery cart to Tundra. Oy. Have I mentioned that my truck's backseat is obnoxiously small? Madigan has thrown his shoes across the parking lot (Mommy, don't forget to grab those on your way back from returning the cart to the store), removed the graham crackers from their box and is currently crumbling them into pieces, inside their packaging. I inform him that I need him to get himself into his car seat, since it's so heavy for me to hoist him the distance. He collapses onto the parking lot and starts shouting, "cereal bar, cereal bar" (at least we've moved beyond chocolate chips, right?). I pick him up and place him in his carseat where he starts frantically kicking and hurtling himself onto the floorboard. Ever wrestled a 35 lb. tyrant while 8 months pregnant? By this time, every muscle I pretend to still have is strained and my little Brown Bear is sobbing in the grocery cart because he thinks I've forgotten him. Tyrant buckled in: check.

On the way home, things continue to digress: Tyrant won't leave seat belt straps buckled and when I ask him to re-buckle himself back in, he just looks at me, defiantly. Pull off at next exit, paddle bottom and return tyrant to car seat. At this point, I guess he decides his only option is to scream and yell all the way home, which he does with astounding fervor.

Almost home... Tyrant yells, "Poop! I have to go poop"! I ask if he can make it until we get home, in about 4 minutes. "No, I have to poop right now!" Careen into Starbucks parking lot, place shoes (which I had recovered from TJs parking lot) onto his feet, grab Declan, rush into Starbuck's bathroom, and start getting Madigan ready to "do his business". He says, "whipped cream!" (a treat we often get him when we do our Starbucks dates on the weekend). I remind him WHY we are in the Starbucks bathroom and he again dissolves into a complete fit of rage. I grab his hand and we haul back to the pickup. Repeat the TJs scenario, almost verbatim (including shoes thrown across parking lot) and by the time we reach home, I cannot get him into his bed fast enough! Lunch might have fallen through the cracks for all of us today, but Declan is fast asleep in his bed, the Tyrant is caged in is bed and I... well I am writing this all out to remind myself one day in the future that things are sometimes ridiculously difficult, but we are never given more than we can bear.

I like all things to end on a bright(er) note however, so here are a couple "special moments" that I treasured from this week: 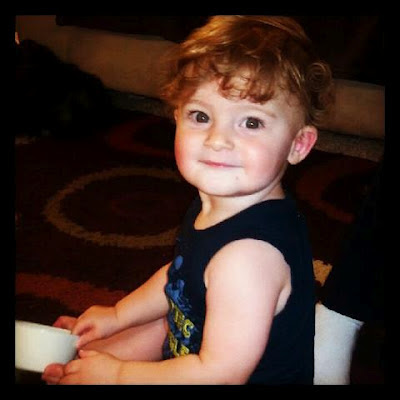 Madigan had the stomach flu this past weekend, so when he says "My tummy hurting", we take it seriously these days. Today, however, he seemed fine, but he was coming up with some pretty clever reasons why we should delay naptime. Example:

Mommy: "Is your tummy really hurting?"

Madigan: "Mommy, my tummy hu(r)ting... baby kickin!" (Simultaneously rubbing his belly and wrinkling his brow into a furrow.)

Mommy: "Oh, is the baby kickin' inside your tummy?"

So, Mommy didn't buy that particular argument, but she did think it was rather clever, nevertheless!
Posted by McBean at 8:17 PM No comments:

Declan's adventurous birth inside the ambulance has left a lasting impression on Madigan. We were driving back from the store the other day, and a police car came whizzing by with lights and siren on. We pulled to the side of the road for it to go by. As soon as the police car went by, Madigan reaches over the side of his car seat, to try to touch Declan and says, "It's okay Pauge... it was a police car, not an ambulance." I laughed out loud! It was so precious! Madigan, of course, really doesn't know the difference in the roles of police cars vs ambulances, but he DOES know that Pauge has a history with ambulances.

It is really amazing to watch these two little people interact with one another and others. They're similar in a lot of ways - definitely brothers. But, they do things so differently from each other. Madigan is focused and action oriented. He has 2-3 toys that he fixates on for any given period of time (usually weeks) and though he will include other toys in the mix, those will always be primary. He definitely seems to feel most loved through words of encouragement, but also through quality activity time. If you let him participate in your activities (vacuuming, barn chores, cooking, cleaning, folding laundry, emptying dishwasher, playing on the slides at the park, drawing pictures, etc.), then he is as happy as a clam. If he doesn't feel "needed", he's like a caged Tiger - WATCH OUT!

Declan is smooth-sailing and pretty much "goes with the flow". He is content as long as "his people" are around. He doesn't have any particular toys that seem to interest him more than others (yet?) but he wants to play with whatever Madigan is playing with, mostly to be near Madigan, his biggest hero. Sometimes, he won't even try to play with the toys, but just stands next to Madigan watching him play, soaking up the bonding brother-time. Each day it is important for me to carve out time (even just minutes here and there) to sit on the floor where he can reach me. He will invariably crawl over, sit on me or near me and pat me with his little hands. Sometimes he stands up and rubs his face in mine (with his face all "skrinkled" up into a smile). At the barn, he is content just to sit in his swing or inside the feed bin (yes, he does snack while in there), as long as he can see what we're doing and know that we're not "leaving him out".

Both boys love other people and are quick to interact with anybody/everybody. If they are unfamiliar faces, Madigan is quick to familiarize them with the important things in his life: trailer hitches, Hun-Hun, Pauge, barn, etc. If they are friends who we see weekly, we just have to make sure he doesn't know they're coming until right before we see them, or he's so excited he can hardly breathe. He has special names for each of them, which are so endearing. And Declan is always trying to connect... if people are sitting in our living room, he often goes around and sits close to them, sometimes touching their leg. He is subtle about it, but if you're watching it's hard to miss.

It will be very interesting to see how baby #3 fits into this little pack. I can't wait (in more ways than one)!
Posted by McBean at 7:16 AM 1 comment: