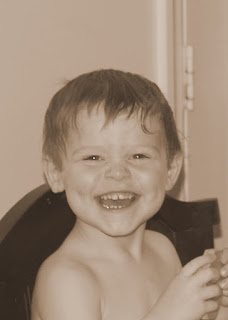 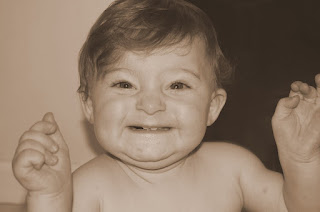 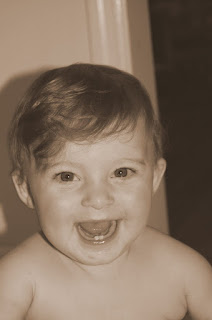 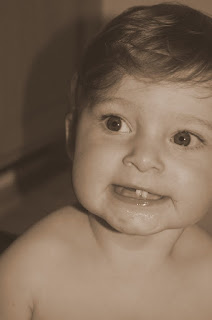 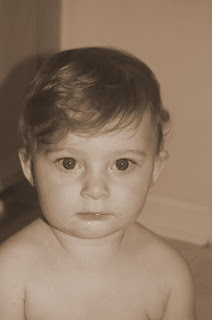 The little men in my life.

Madigan-phrases-I-love from this day:
"Hook up the horse trailer hitch"
"Water the Morning Glory"
"Walnuts and raisins for snack"
"Mama H (Mama Horse) needs hay"
"Happy Baby" (while patting my tummy)
"Happy truck" (after I got gasoline this afternoon)
"Hi Dec!"
"Dazun Not Home!" ("Nope, Daddy's at work", we reply)
"GumBum wearing orange" (while looking at a picture of Grandma wearing a red sweater)


Special Declan Moment from today:
Declan was fussing while I was bustling about the house. He had been crawling after me from room to room, but eventually his little knees were just tired and the frustration was getting to him. So, I walked over and picked him up. I turned on some George Winston piano music and started dancing with him. He smiled up at me, put his thumb in his mouth (those poor little teething gums) and laid his head on my shoulder. He stayed like that through 3 songs! My heart was melted into a puddle.

I can't believe how much these little brothers love each other. Of course, there are those moments when sharing isn't all it's cracked up to be and crabby babies aren't always the most selfless, but there are no words to convey how sincerely these they care about each other. The spend their early mornings talking to each other from their cribs... giggling, shouting, talking and bouncing around. Whenever Declan starts to cry, Madigan brings him a toy he thinks D might enjoy and pats D's little head. Delcan spends a good portion of his day crawling after his brother, trying desperately to keep up with his every movement. When they see each other after "nap"time, they both smile and giggle. Yesterday, I saw Declan climb over, pull up on a chair where Madigan was sitting and snuggle his face next to Madigan, who returned the gesture by kissing D's nose. I wish I could bottle up these moments...
Posted by McBean at 1:40 PM 3 comments:

Decided to take the Tiger on a stroll pre-nap yesterday since the temperature outside was mildly tolerable - at least there was a breeze. I thought perhaps the exercise might grant us more success in this otherwise futile endeavor we play at each afternoon. So, we loaded up Declan in the stroller, attached a "leash" to the stroller for Madigan to "steer" with and off we went. The walk was wonderful for the first half. Madigan trotted along happily, remarking about the mailboxes, flowers, UPS trucks, trashcans, airplanes, barking dogs, cement cracks, etc. Then, we rounded the corner which signified that we were exactly half way through our walk. He did an about-face and started pulling us all in the opposite direction, yelling "Done, done, done." He was absolutely adamant that home was not to be had for a good long while. I sat down on the ground next to him and tried to explain with calm and reason why we would be headed home - heat, Declan needing a nap, mommy needing water, everyone being tired. He collapsed in a fit of tears and rage. So, I picked him up, placed him in the stroller next to Declan, buckled him in and pretended not to notice the neighbors who were at this point peering out their windows to see who was torturing the child outside. Then... the thud on the ground as Madigan leaped from the moving stroller in one last dramatic effort to make his intentions known (because clearly the blood curdling scream wasn't having the anticipated effect). By this time Declan was also crying from fatigue and frustration and I was close to following suit. Somehow my overheated self managed to package up the raging Tiger back into the stroller (which he was less inclined to jump out of after incident #1), hand a bottle of milk to Declan in some pathetic effort to temporarily placate him, and throw myself into a quick sprint homeward. I can now safely declare that our pre-nap walks have been postponed indefinitely until cooler weather settles into our valley, Tigers recognize that the last 50% of the walk is not the enemy, and I include a 5 gallon bucket of water to soothe hot tempers, and thirsty mouths.

I am happy to report that we all took delicious naps following the ordeal, however.

Okay, I'm off to sweep up the dried lentils poured all over the entryway...
Posted by McBean at 1:20 PM No comments:

Here are more photos of the porch garden. It is going great guns and starting to give us some yummy food! 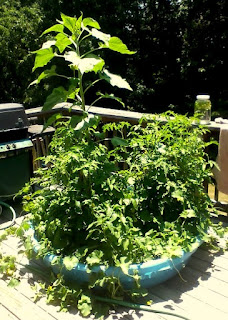 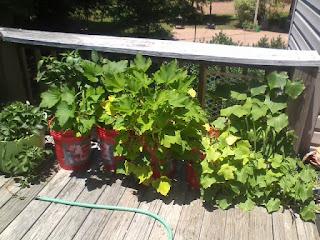 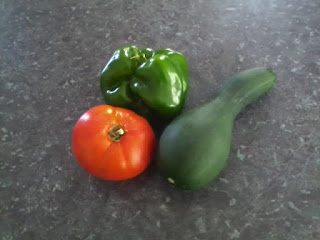 Posted by McBean at 1:42 PM No comments: 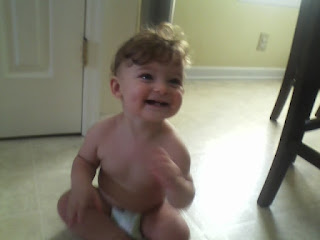 Posted by McBean at 1:34 PM No comments:

This week I've been experimenting with Crock Pot Bread and here is a recipe that I did which worked as a whole wheat option and I also included a cinnamon/raisin twist to it, below.

Mix together until it is soft, moist dough and then knead for 5 minutes. I let my Kitchen Aid do the kneading, but you can do it by hand if you add 2 minutes to the overall kneading time. Form into 1 round loaf and place on parchment paper in the crockpot. Make sure all the sides of the loaf are touching only parchment paper. Turn crockpot on high and cook for 1 hour + 10-20 minutes. The loaf will not look browned on the top, so the way to make sure it's done is to press the center and make sure it doesn't feel soft or gooey. I like a little crispier outer crust, so I then place my bread in the oven to broil the top for about 5 minutes. It is super yummy with a little butter and/or honey!

For the cinnamon/raisin option, use the same ingredients as above. Once you have the dough fully kneaded, roll it into a rectangular shape. Smear cinnamon, brown sugar, raisins, walnuts and anything else you like all over the rolled out dough. Then start at one end and gently roll into a loaf size. Press down the ends so that they goodies don't fall out as it rises in the crockpot.

The great part about this bread is that it rises in the crockpot, and it takes about half the amount of time that it takes to make bread traditionally in the oven! Not to mention the added benefit of using less energy/producing less heat in the summer! :-) 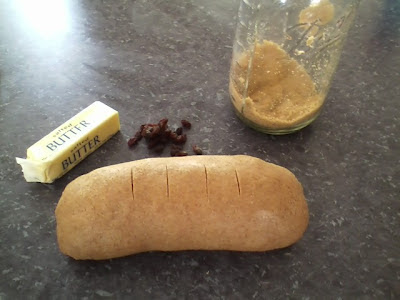 Sitting on the couch, listening to the brothers chatting it up in their beds upstairs... bedtime can be such sweet relief, even if they're not asleep yet. My mind is mostly blurry from today's bustling activities - thank you exhaustion - but through the fog there are so many things that made this day special. I wish I had time/energy to write a synopsis of each day's happenings, just to reflect back on one day when the seasons have passed and I miss the Ol' days.

Recap:
Woke up early, hitched up trailer and finished getting my winter's supply of fresh green hay. Earned some brownie points with my equine companions today.

Played ball with Declan, who can catch it! I roll it to him and he reaches out, grabs it, snuggles with it, then sends it back to me.

Watched Auntie Virginia showing Bundle more "O"s on things around the house, only to hear him point out an "O" with much enthusiasm tonight! We've been teaching him the letter "O" for 2 days now, pointing it out on anything and everything we can find... even hopped out at a stop sign to point out the "O"! He gets it and is so excited!

Watched Sabina, the crazy white dog, pounce on Fur Elise, the barn kitty, with glee. Fur Elise didn't even move! Those two are inseparable. If you look out in our field on any given day, you are likely to see our little herd: 1 white dog, 1 teeny cat and 1 brown goat.

Upon finishing chores tonight at the barn, I discovered two little creatures in the bed of the pickup, soaked with milk that they had successfully spilled all over one another. Because it was whole, non-homogenized milk, there was an oily film all over the truck and the children. Hose time, much to their chagrin.

Sat on porch staring at my plants for a while.

I'm loving this garden so much! Listened to Declan try to sound out words after we say them. He's tried: White Dog, Mama, Nigh-Night, Dog, Hi, Wow. Just so precious!

Could not stop laughing when Bundle told Daddy, "Bye Bye George (with a definite Boston accent)". And then later, as he announced "George at work. George not home." I do try to correct him and remind him that George and Daddy are one in the same, and thus he should refer to Daddy as Daddy, but it's just so funny. Sigh.

Of course there was the laundry, dishes, vacuuming, Tiger-sans-nap routine, dog's vaccines, dinner to prepare, fly in my tea, dog tu-tu on floor, the toy tornado that hit the lower story of the house, etc... but all in all, it was a good day, to be sure.
Posted by McBean at 6:12 PM 2 comments: