For those of you who need your fix, here are Tiger tales from this week:

"Paugie was born in the ambulance. Taco (Lochlan), Hun-Hun and I were born in the hospital." Mommy: "I think Hun-Hun was born in a factory." "No, Mommy, Hun-Hun was born with me at the hospital." Naturally.
As I was giving the "little boys" a bath, side by side in the kitchen sink, Madigan assisted in washing their hair. He patted Lochlan's head and said, "We are making memories my sweet brother." Can he be for real?
As we left the grocery store last Monday, Madigan turned around in the stroller and SHOUTED: "Goodbye my friends!" Touching. And slightly awkward. :-)
After putting the smaller men down for their naps one afternoon, Madigan slid next to me on the couch, placed his paw on my arm and said, "Mommy, would you like to have tea together?" Dear boy, how could I say no?
"Mommy, what happened to the sunflowers?" "They died." Pause. "But Mommy, they don't have batteries! They didn't die." We still have a few things to learn in this life.
We took Daddy to the park this morning (you know how restless he gets when he doesn't get his outdoor time!), so that Madigan could prove his climbing wall skills. After we had departed from the park, however, the Tiger realized that he had forgotten to swing whilst at the park; a thorough meltdown ensued. When the wretched mother refused to return to the park, Madigan looked at Declan and said, "Paugie, we're ruined!". The drama may be hereditary.

Paugie has been taking time to "chill out" (in the refrigerator) on these balmy August days. We can be frequently heard calling out: "Paugie, please get out of the refrigerator." This little man has one of the most grateful hearts I have ever seen. He faithfully says: "Thank you Ma!", or "Thank you, Da", followed by one of his mesmerizing smiles. He loves to read with me at night, while Daddy is playing with the Tiger in the front room. He is very particular about where I should sit, where he should sit, and which blanket should be involved in the process.

Lochlan is the happiest guy in town, while simultaneously running for the record of "man who sleeps least in this world". An impressive feat to be sure, but he is a truly remarkable boy (as I have always said) and is indeed accomplishing both successfully! His smile brightens up the world around him, no matter where in that world he happens to be. He still loves to be hunkered down in my hip-pack, which makes for a lot more convenient outings during the week. Then, I have only 2 critters to corral at any given moment!

We made 24 quarts of organic applesauce this week. The project seemed to take the entire week long, but I think it actually only took about 6 hours total. The results were inspiring!

And Mommy's accomplishments for this week? 6 loads of laundry washed, line dried (still don't have a functioning dryer), folded AND put away by Friday evening. I'm counting it all as victory!

Posted by McBean at 3:39 PM No comments:

Paugie has a passionate love of rain. He is boy wired after his mommy's own heart! If it's raining, he comes to grab my hand and waves for me to look outside. He says, "Rain, Rain!" If there is no eminent risk of thunder and lightning, I usually acquiesce, much to his delight. He is most thoroughly delighted when I join him to splash in the puddles, but he is quite content to just bask in the drops himself.

One of Kris' and my first dates at Bryan College was one evening when Kris asked me put my "rain gear" on and join him for a walk in the rain. I waltzed out the door in my rain coat and rain boots only to find a very wet boy/man in shorts, a t-shirt and flip flops: his idea of rain gear. He converted me to his understanding part way through our jont by hoisting me into a VERY large puddle, rendering my rain boots and rain coat utterly useless. Alas, our perspective of appropriate rain attire/activities appears to be genetic. 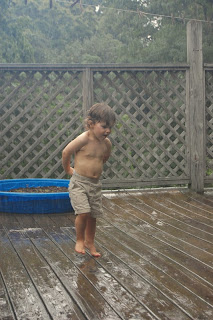 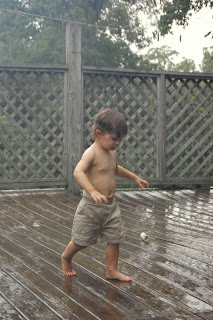 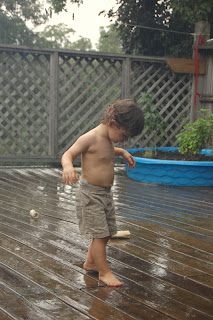 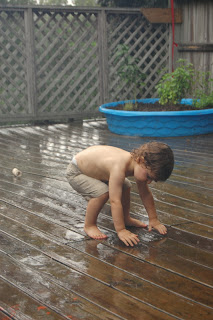 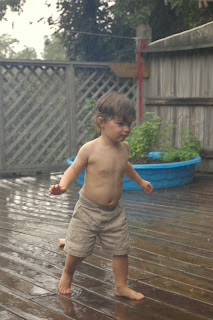 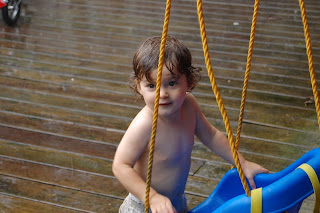 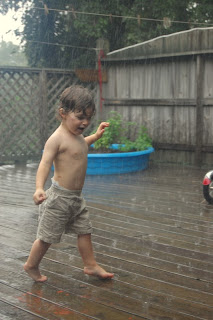 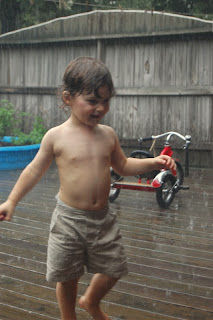 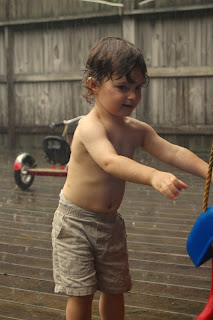 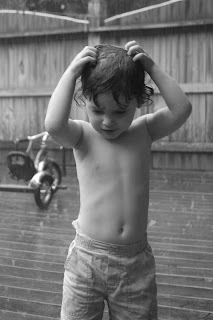 It is with entirely too much propulsion that we have approached the second birthday of our "Paugie Boy". I have reflected a great deal this week on the incredible person that this little man has been/is/is becoming. So full of (his own) perspective, assured in his opinions on every matter, passionate in his expression and consistently thoughtful - and all this behind those honey brown curls and sparkling eyes.

This spectacular person touches the heart of everyone he knows or meets. His extraordinary attention to detail(s) gives him insight into the emotions/feelings of others and he cares deeply about other people (starting with his brothers), which is something I know to be unique. He is often misunderstood, usually because his verbal communication has been misunderstood, but often because his reasoning is (simply) complicated. His frustrations often make perfect sense if we take the time to understand them/hear him out. And sometimes they are simply the rants of a 2 year old with a will of iron. :-)

This boy adores his brothers! This morning when he saw Lochlan, he ran to him, wrapped his arms around him in a rough smother and kissed him abruptly on his face. Lochlan has grown accustomed to these "tender" moments, and his whole face breaks into a happy grin. Declan looks to Madigan for many cues, though, being the independent thinker that he is, he is highly motivated to branch into his own fields of exploration/experimentation. When given a direct admonishment/order, he creatively works the possible angles available to him and certainly is disinclined to acquiesce to any particular request without first exploring alternative options.

A WWII veteran (according to the cap he was wearing) was standing in line behind me at Costco last week and Declan started talking to him. The mostly-deaf hero was clearly enjoying every minute of the interaction and when he looked at me, his eyes had small tears. He said, "that is a very happy boy right there. His whole face says so." When I thanked the veteran for his service, Declan chimed in, "Hee hee!" When I translated Declan's sentiment to our new friend, I could tell that a not-quite-2-year-old boy had left his mark on the heart of an old soldier.

I thank my God, daily, for this marvelous person who has shown me the beauty of tender affection, quiet moments of just being together (with a cup of warm milk and favorite blanket, of course), and heartfelt joy in the "little things". I know the past 2 years are reflective of what is to come as this little man becomes all that he is destined to be... and that brings me great delight. 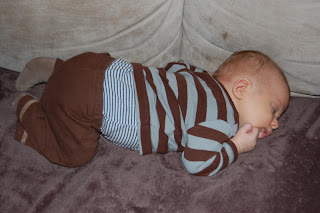 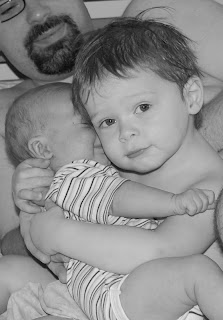 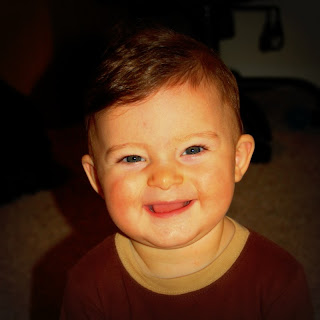 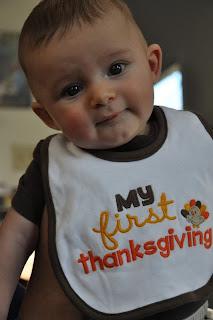 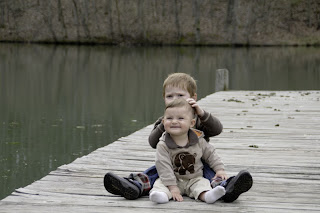 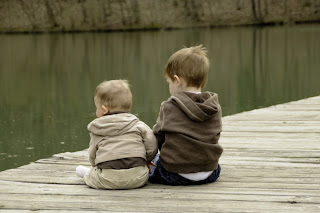 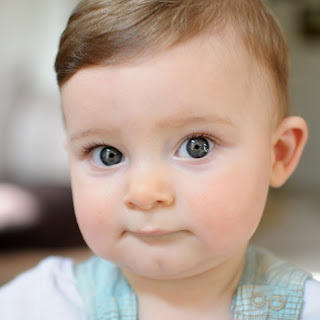 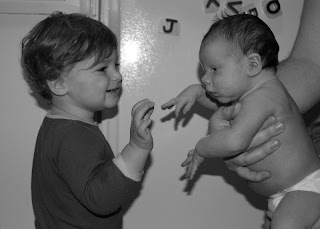 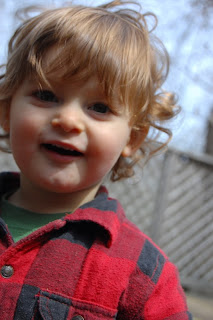 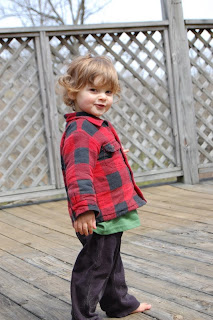 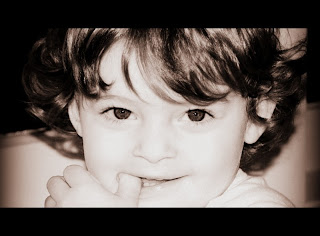