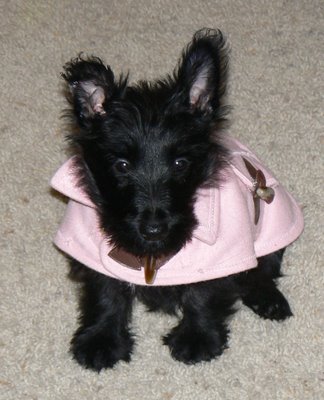 Profile of a Princess 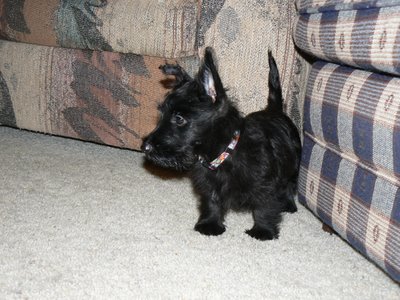 Posted by McBean at 5:16 PM No comments: 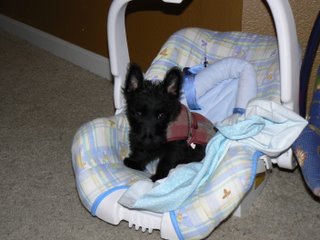 All babies are fascinated by babies. Last night we had some friends come by with their little ones. Val was enthralled with the babies' things! "Mommy, I think I need a pretty carseat like this one."
It is amazing how much she is growing! She has officially outgrown her first jacket (a plaid coat from one of my stuffed animals). She's learned "sit" and is learning "come" (I think all Scotties remain in a permanent state of 'learning come').
Posted by McBean at 4:25 PM No comments:

FRC says: "Before you put Wal-Mart on your naughty list this Christmas, a recent corporate statement shows that the company is trying to make amends for its pro-homosexual actions. In a press release made public before the biggest shopping day of the year, Wal-Mart says it will "no longer make corporate contributions to support or oppose controversial issues unless they directly relate to their ability to serve their customers." To dispel the unrest over its political leanings, the statement went on to say, "Wal-Mart does not have a position on same-sex marriage, and we do not give preference to gay or lesbian suppliers." This was welcome news to Rev. Don Wildmon, president of the American Family Association (AFA), who has since cancelled AFA's post Thanksgiving boycott. Other groups, like Ohio's Citizens for Community Values (CCV) organization, are taking a "wait and see" approach. CCV President Phil Burress refuses to call off his group's boycott until Wal-Mart takes back its $25,000 donation to the Gay and Lesbian Chamber of Commerce or ends its membership next year. For a company that has suffered a loss of profits and credibility among consumers, only time will tell if Wal-Mart can win back its base. It will take high standards, not just low prices, to persuade America's families."
AFA Action Alert
Posted by McBean at 11:33 AM No comments: