It's safe to say I'm looking forward to this coming week, if only because it absolutely cannot be as bad as last week. When the unwelcome bug made it's way into our household, attacking the three smallest members of our pack, I knew it wasn't going to be pretty. I realize (again) why God does not allow us to see ahead in our lives to the days to come - it would both spoil the outrageous joys/surprises/beauty/breathtaking moments of love and laughter that we encounter, and it would make us seek any possible escape from those challenges that we despise. I'm still a firm believer that challenges are twofold - a result of this fallen humanity and (hence) the fallen world we reside in, but also that they are an opportunity for us to learn what we are made of. So, as I gaze over the 8 loads of previously-barfed-upon laundry that is piled into a heap on my kitchen table, and listen to the relatively unstrained breathing of my sweet boys (finally), and watch as the milk is being consumed once again at it's usual rate, I am thankful. I'm thankful that the week is over, and that a new one has begun. And I'm still utterly mesmerized by the little men in my life (and the big one too, if truth be told).

Madigan's observations on life around him are entertaining. His perspective is unique, to be sure, and because he states all things with such authority, it can be immeasurably amusing - or terrifying.
As Madigan helped me fill a water bucket for one of the horses at the barn, a couple drops splashed in his general direction. As I prepared to carry the bucket into the stall, his usually helpful person was strangely absent. When I requested his "assistance" he stated emphatically: "No Mommy, it's too dangerous. The water splashed." Compelling argument.
He often picks up my phone when it's ringing, but since he doesn't (yet) know how to answer it, he just hands it to me and says, "Here Mommy she (he always assumes it's Ankie Tae) is calling." One day, I set the navigation system on my phone and put it in the console of the truck while I ran upstairs to grab something for our upcoming road trip. As I headed back down the stairs, he met me with the phone in his hand. He handed it to me and said, "I talked to her for a while." I probed further as he headed back to the truck; I figured his dialogue with my GPS system must have been challenging. He turned around, hands clasped behind his back, and thoughtfully said, "She wasn't very talkative".
As Gumpai and I returned to the truck after feeding Devany, Madigan announced, "I cleaned it all up for you Mommy!". With trepidation I asked him what he had cleaned for me and he said, "My pee!". He had decided it was too dark to get out of the truck to take care of business in the grass, so aimed for the cup holders instead. After much growling and a reminder (on how things "ought to be"), I'm mildly confident that he will remember the proper place for such actions in the future - i.e. NOT THE TRUCK.

Paugie's language is developing rapidly! Not only is he speaking in articulate sentences, but we can even understand him most of the time, much to his delight! The greatest challenge I face when interacting with him is when he refers to something by the nickname he's given it. Example A: Measuring Tape = "stick". Example B: Crazy White Dog = "Reena". Example C: Wash hands = "Mo. Han(d)." Example D: ANY body of water, including lakes, ponds, streams, bottled water = "Mo", which is also the word designated for Milk.
Recently he came running in to get me, and with his hands stretched up, he said "Mommy, refresh!". I asked him if he wanted a baby wipe for his hands and he nodded enthusiastically. Refresh? Where did he get that?
Today I found Declan stroking Sabina's head... when he looked up and saw me, he said, "Loving on Reena." This guy has such a big, beautiful heart.

My Jevy has been going through some rather significant separation anxiety of late. He's still the happiest guy I know as long as we're touching, but if I appear to be making a move in any direction but his, that wondrous world comes collapsing down around him. He falls into a fit of despondency, prostrate onto the floor with his head in his hands. Last night I sat on the floor and he and Paugie intermittently crawled over to me for hugs and kisses then back to their trains, then back for more snuggle time. Those are the best minutes of my life! During one particularly difficult night of his sickness, he slept upright in my arms with his head buried into my chest. He kept reaching up and patting me, even while sleeping. It's hard to stay annoyed by the exhaustion in those little moments.

Even when he's sick, he's still lighting up the world around him. Paugie Boy: 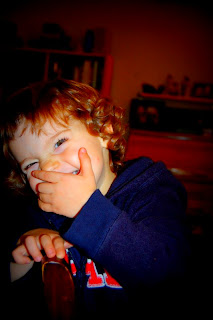 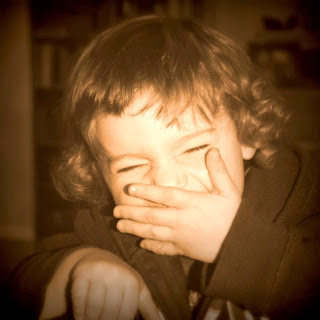 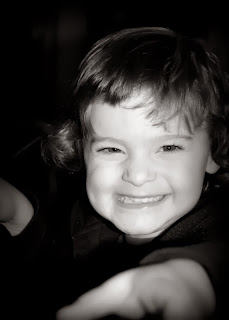 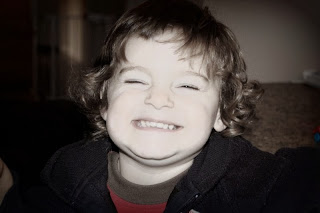 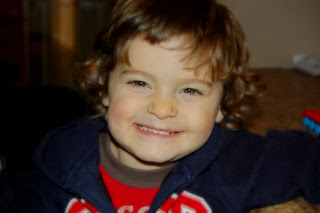