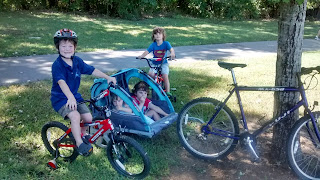 Beautiful fall(ish) days beckon us outdoors. Today, we got my bike cleaned up and ready to roll, took our new (to us) bike trailer (the excitement was overwhelming!!!), for it's first spin. The big boys kept up a hearty speed on their new bikes (thank you Gumbum and Gumpai!), and 3 miles later, the smiles hadn't lessened. As the breeze rushed past us, Madigan (who was riding next to me) looked up and said, "Mama, this is super awesome". Paugie's bike is a smidge too big for him, and after a couple encounters with the dirt over the past week, his confidence was rattled a bit. However, he kept getting back on and today I saw him push himself, determinedly, to master "issues" - brake successfully, mount the bike without it tipping over, dismount the bike without it tipping over, traverse downhill with the naturally increasing speed (without panicking), and turn around on the trail while staying on the bike. Though exhausted, he could not wipe the smile off his face as we neared the end of our ride. When I queried him, he said, "Mama, I love riding my bike with you!" Awe, this tender heart with so much determination and thought governing his decisions and actions. 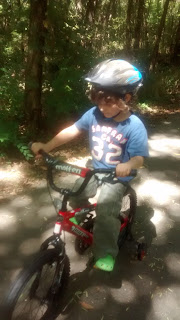 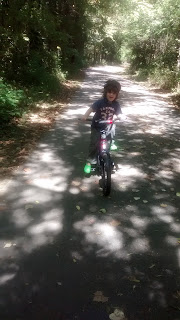 In extreme contrast I watched as Madigan pushed his bike to great speeds, often spinning out his back tire on the takeoff, skidding to dramatic halts, off-roading where permissible (or not), and even practicing falls in the grass alongside the trails. So much joy, energy and (w)reckless abandon to behold. When he placed his feet on his handle bars, I inhaled and started praying. :-) 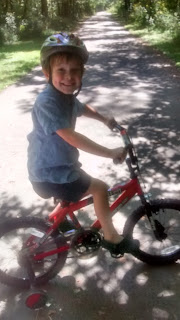 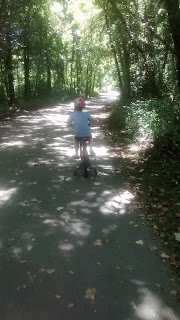 In the meantime, my wee-est boys were waving their hands in the wind, laughing out loud, and eventually snuggling down in a peaceful trance as they sat in the little dream of a bike trailer. I foresee many happy fall days to come! 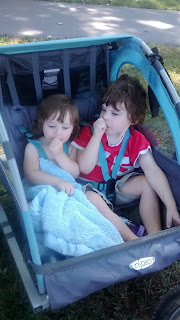 The littlest mister among us had a napping fail this afternoon, so I waited for him to disintegrate as the evening progressed. Much to my surprise he got happier and more cheerful, engaged in a relentless and boisterous game of chase with his brothers about the house. The incidents of hair pulling did, however, increase, much to everyone's chagrin. They all handle the exhaustion reality differently: Madigan becomes a very fast tiger with boundless energy and lack of control (wrestle him to the ground, give him a big kiss and tuck him swiftly into bed). Paugie starts crying - about everything (nothing a good snuggle can't cure). Jevy finds my lap (sometimes forcing me to sit down wherever I am standing), lays his head against my chest and pats me with his chubby paws (he won't fall asleep there, but he will stay put and laugh contentedly). Kelto gets ornery (apparently), seeing what possibilities are available, crossing lines he knows are clearly drawn (grab his yumminess, feed him a nice warm bottle of milk and get that human to bed, immediately, if not sooner).

Tiger tales, continue...
"Mama, when we grow up to be humans, we'll rescue people and put out fires." I have no doubt. Really.

While the 4 brothers played trains, Madigan randomly stated: "Paugie, there are miserable people. We are happy because we have brothers." Paugie's response: "Yeah, and we love our brothers." I'm dying.

What every mother doesn't want to hear, and yet... "Mama, you and Daddy will die someday, but not until we're all four men. I'll stay here to take care of my brothers. And Paugie will help me." So, no worries, Mama - we got this.
Posted by McBean at 9:29 PM

Oh my goodness, I love it! Contessa puts her feet on the handlebars too--I hold my breath!