In the darkness, perspective is gained 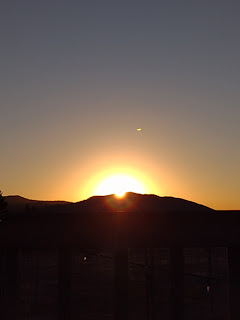 Kelton met me on the stairs after escorting Lochlan to the bathroom to throw up. He said, "Mom, the sun is about to come up, let's grab some tea and blankets and go onto the porch to watch it." He was right... and it was beautiful. He wrapped his legs around mine as we sat in the cold morning air (48 degrees) and we welcomed the sun onto our day.
Lochlan has been throwing up for the past 22 hours. He started yesterday morning, but didn't act particularly ill, so I thought perhaps he had just eaten something he shouldn't and would bounce back. By the afternoon, he was very sick. He has thrown up absolutely everything I've given him to try to re-hydrate him and he has thrown up nothing. He was up almost the entire night and because he won't throw up in the toilet, it is imperative to try to keep him in the bathroom. He would migrate from the bathroom and I would get him off our sitting chair in the loft just in time to prevent vomit from covering the chair. Poor guy... it's so uncomfortable to sleep on the floor in the bathroom no matter how many blankets/towels I put down for him. Yet, until he can master the toilet there are really no other options. I have no idea what the catalyst is for this round of sickness, but it is likely one of the countless things that are imbalanced in his intestines. I need answers for this kid.
Last night the boys and I sat on the porch and watched the stars for over an hour before bedtime. The night sky is so bright here and it is always a reminder of how small our world is compared to the grand universe where we see but a glimpse. There is so much activity in the expanse above - we saw shooting stars, satellites, airplanes, planets and stars that looked like they were twinkling. The very living of life can feel a bit daunting when we become weary; in the darkness, perspective is gained.
Posted by McBean at 7:03 AM