We make the zoo look clean

Though the title "Poop Happens" might be more appropriate for this blog entry, for the sake of decency, I chose a different one (you are welcome, Aunt O). After spending a lovely morning at the zoo this morning with my three incredible little men and two dear friends (Sophia and Melanie), we came home to prepare lunch and get our naps on. Then, I suddenly and not so enthusiastically realized that there was a full blown conspiracy in the works and I was the unlucky target (or so it seemed). All critters and small humans alike contributed to the effort and I spent a full 21 minutes picking up "crap" in places it was supposed to be and not supposed to be. The 3 small humans and the 3 canines in my charge created enough mass chaos (and nastiness) to make me frantic. As I began to feel I was finally making progress, Lochlan finished the group project with a thorough blow out. Wow. I really did start laughing at that point... it all seemed so surreal and absurd that there really wasn't much else I could do.

In other news... we are filling our days with Christmas projects... they are slow going with these little helping hands so eager to learn and to participate in every step of the process, but they are coming along! We are making all of our gifts this year and Bundle and Pauge are putting so much heart into everything they are doing. It's inspiring to see! Pauge studies every move I make, watches how everything comes together and mimics every action/word carefully. Any offered assistance from Mommy is strictly forbidden! Bundle runs from project to project. He is such an action man and he will be the man to get it done, though sometimes he "fudges over" details to reach the goal more efficiently. He is happy to receive assistance, as long as it means the end goal will be reached sooner!

As I have observed them this week, something has stood out to me about each of them:
Precious people! 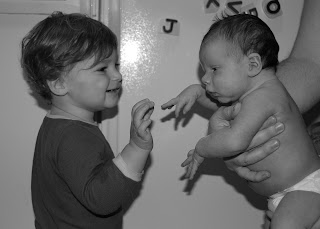 Precious indeed, even in the aftermath of a poopy afternoon. And a rather amazing mom, to boot. Or to poop, perhaps. Or just pooped out. Hang in there. Love, dad