Underwear on the outside 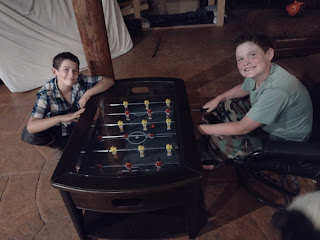 Kelton and I were perusing the costume aisle at Goodwill. I found a Superman costume and a Mr. Incredible costume and both looked like they might fit, so I suggested them as options. He looked at me, absolutely horrified and shook his head vehemently. I was a little confused by his reaction, because he loves both characters. When we got to the car, Kelton looked at me quite seriously and said, "Mom, the reason I don't like either of those costumes is because those superheroes wear their underwear on the outside. I just can't handle it! I mean, it's too much!" I. Could. Not. Stop. Laughing. I also, now, cannot un-see that.

I woke up this morning at 4:00, before the sun was up. There was a human being staring into my face, eye-to-eye, hot breath on my nose. I almost died of a heart attack. There was a devilish giggle as Lochlan responded to my reaction. Then, he snuggled in under the covers, pressing his cold legs up against mine. I didn't mind... he's quite easy to love, sometimes. :-) He makes life perpetually challenging for us all, in spite of his snuggle skills. He currently prefers nakedness. I mean, I get it... sleeping naked is an often unappreciated luxury. He fully appreciates it and not just when he's sleeping. When he saw Allie last week for speech therapy, he gave her the biggest smile (devilish grin, again), took off at a full gallop for the house, pants and undies flying as he ran. He was ridiculously delighted with himself. Allie has seen it all since she's known us so she was virtually non-responsive, much to his chagrin. The less reaction he gets the less we see of certain body parts. In this case, it's doubly challenging, though, because he just genuinely prefers to be naked. Grocery stores are less open to the notion of embracing nudity though, so we're working toward at least underwear and pants.

Madigan is making boats. Out of everything! He has made some remarkable boats and my personal favorite is out of wood. We went into a store today specifically so he could purchase (with his own money) fabric to make masts for his boats and a cape for his little brother to dress up as an ancient Greek soldier. The lady cutting out the yards of fabric for him was clearly delighted as he told her in great detail about his future plans for the fabric. I love watching Madigan blossom and grow (slowly) from boyhood into manhood. The slow trickle forward brings me great delight and I don't want to rush a minute of it. He is passionate, kind, boisterous, thoughtful, animated, considerate, incredibly hard working and takes delight in an endless array of things in this life.

Declan can build anything out of legos, but his particular talent is building Transformers. They have each saved up their allowance and purchased a Transformer, but I will tell you that the ones that Declan builds from legos are far more impressive than anything they've purchased. I cannot believe how his mind works and I find myself just staring at him while he's working away on his projects. I stare at him because he's ridiculously handsome too. And he's one of the absolute best men I know. He went to help my Aunt T move this past weekend and apparently had a headache from the time he left the house until he got home 12 hours later. By the time he got home his headache had morphed into a full blown migraine and he vomited as soon as he got home. But, I was told that he did not complain about his head hurting. He quickly recovered with sufficient hydration and sleep. He's strangely strong with the ability to be considerate of others and so gentle, as a human.

They're absolutely some of my favorite humans. I admire each of them and never stop learning from them each day. Some days, especially these days, I wake up with less enthusiasm about facing what will be required of me in this season in life. I am always encouraged when I watch them awaken with hope in their hearts and determination to explore all that has potential to be explored that day.

I seem to spend the majority of my days moving rocks, picking up trash, moving loads of debris to the dump, moving copious amounts of dirt, dusting and re-dusting everything, cleaning one Airbnb or the other or both, running the endless list of errands (hazards of starting up two new businesses while managing flood mitigation and simultaneously moving for the third time in a few months), schooling the boys, helping repair all things broken or breaking, chasing naked barefooted boys down the street(s), savoring magnificent sunsets, and of course moving more rocks again. I have been trying to push myself a little less hard now that some of the walls are in place around the A-frame giving me greater confidence that it is safe from the flooding. Parts of me physically started to shut down and not function correctly, probably from excessive fatigue and exhaustion. It took almost 5 weeks of being more careful, moving slower, trying to sleep anywhere I could, and generally restraining myself to do less than I probably need to, but I have started to feel human (in the right ways) and most of me is up and functioning again. I find it easy to become overwhelmed by the unbelievable task list ahead, but I am trying to pace myself, create time buffers, and live in the constraints of reality and limitations (mostly physical and financial). My heart breaks each day as I look upon the devastation that is my reality in this place, but I remember to look to the surrounding hills, to the vibrant mountain behind it all and see how life springs forth from every crevice. It will not always be like this. The fields of mud will one day be fields of flowers again. What is broken may not be the same, but it will BE again. 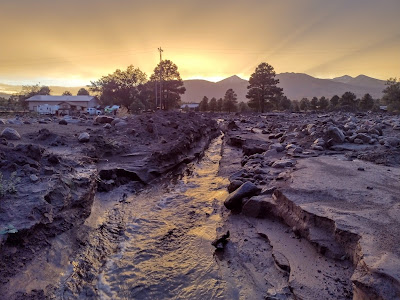 In all of it, and past the weeks of extreme fatigue, I once again am starting to find inspiration to create simple beauty from the things I see and find. I found this piece of wood the first day I hiked my hill after so many months of being locked away from it. It was a beast to carry down from the top, but I knew it was to be a reminder of what has been and what can be. Kris helped me make it into a lamp this weekend and I am so completely delighted with it. 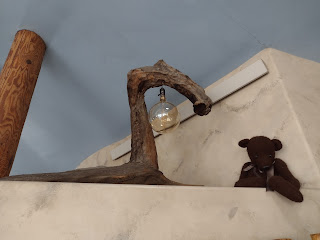 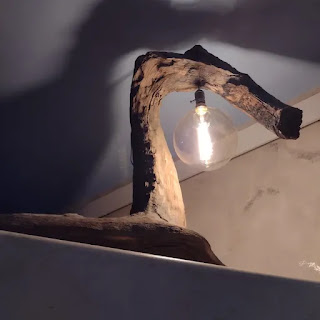 We may live in the floodplain. The mountains sometimes seem so far away in the darker days, when the rain falls, the waters come against us, the sunshine is dimmed by the clouds, and we are faced with the impossible yet again. Then, in unexpected glory the sun radiates through the clouds and the painter gives us paintings that we cannot fathom. Let us not grow weary. 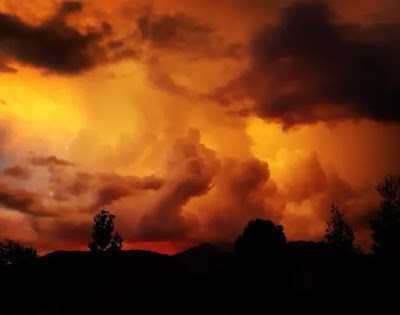 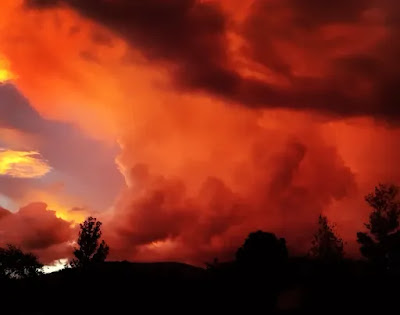