Sometimes we get what we deserve.

Madigan is the child that Kris and I both deserve. He is always prepared, makes a plan the moment the suggestion of something is on the wind. He is forceful with his opinions and is ready and capable of sharing them with anyone and everyone (often oblivious to the recoiling internal response of his audience). He's rarely wrong (similar to his dad, though he hasn't quite achieved the ability to never be wrong - perhaps that comes with maturity?). He's an action man and takes initiative on anything and everything, making impossible things happen. He has enough energy to implement any plan he has either designed or bought into. Sugar is literally poison to him; wanna see crazy? Check! He has the ability to see big picture, what the likely outcome of something might be. He follows rules and is completely dependable. He is also spontaneous and derives his life force from adventure(s). When we go hiking, Madigan is the one who we all go to when we have carelessly (or out of false confidence) forgotten our water, snacks, band-aids, sunscreen, hair ties, fingernail clippers, keys, or the kitchen sink. He listens well, but does not always hear.

Declan is the child neither of us deserve. He is thoughtful, kind, and full of ideas that are completely outside the box. He has one pace that he lives his life by (and hikes by) and it doesn't match any of us. He is steady and dependable. He is stubborn and impossible when he chooses to be. He comes up with the best and worst jokes much to our adoration and chagrin - respectively. He is incredibly hard working when he believes in what he is doing and, if he doesn't believe in it, he is incredibly adept at accomplishing absolutely nothing while simultaneously modeling the picture of efficiency (okay, I might deserve this one - this was my childhood talent). He is crazy smart but utterly humble. He sees people and he loves the unlovable.

Lochlan is the child that Kris deserves. He sees life from a perspective that only he understands. He observes everything around him and though you might question his comprehension of it all, you would be foolish to do so. He works very hard for things he desires, but is absolutely and resolutely immovable on things he wishes not to participate in. If he feels manipulated or pressured into doing something, it is GAME OVER! He is very affectionate and loves fiercely. HE. SHALL. NOT. BE. CONTROLLED. He tolerates outdoor activities, but only if he must. He far prefers gadgets, electronic devices, and man-made motor powered toys. He'll observe and potentially appreciate a lovely view, but would choose to arrive at said view via car rather than on foot. He needs his meals on schedule or cranking will ensue. He needs to know the plan; ahead of time. He needs a schedule. Let me just state that a little more clearly. HE. NEEDS. A. SCHEDULE. He loves to mess with people's minds and if he thinks for one tiny second that he has found a "mommy button" be assured his single focused mission in life for the next forever long will be to operate the newfound button. He surprises us at every turn and watching him develop has been mind numbing, exasperating, miraculous and has assured me that I have absolutely no idea about anything so I might as well just sit back and enjoy the ride.

Kelton is the child I deserve. Kelton is funny without trying to be. He sees the world in a different light and he just says it the way he sees it. I keep hoping that someday he'll desire to and implement the ability to guard his words, just a wee bit. He is a youngest child in some ways, but yet he has taken on the role of older brother as he relates to Lochlan, and usually he does so masterfully, with kindness, love and diligence. He has had to learn a lot of lessons his own way - we've talked a lot about the ample opportunities that he will have in life to learn from the mistakes/lessons of others rather than having to learn things by his own mistakes. I'm seeing some improvements in this and it's exciting! Kelton does not need a plan. He's fine with a plan, but he's great with spontaneous ideas, too. He loves adventure. He loves exploring new things and beautiful places. He sees beauty in all the tiniest places. He sees God through what He has created and he appreciates it at the core of his being. He is incredibly hard working and can out-hike most fit adults. He takes action often without thinking beforehand. He will put his whole heart into what he believes in, but if he has not bought into the idea... forget it. He has scared the living daylights out of each of us on separate occasions with screams of agony but he is quite at the risk of us ignoring him in future catastrophes as he has most often done so with little to no cause. He's simply dramatic and acting the part. GRRR. Also, he has a phobia of his teeth falling out so the eminent future (of his baby teeth all falling out) does not bode well for the coming days.

I cherish these days. I know they will pass all too quickly. I will hold them closely to my heart and treasure them for my time on this earth. 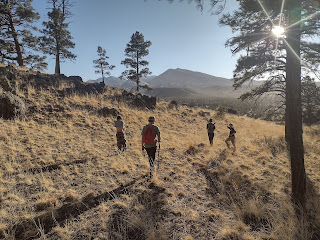 One of your best entries! So astutely observed and documented…they are truly just as you have written.