Conversations with a Giraffe

Madigan has been visiting his aunties in Austin for the past week... it's crazy how slowly time can creep by when you're missing someone you adore. :-) He's had such a fulfilling week, getting to fly alone for the first time, seeing the best of "old friends", cousins, aunties and so much more. I think it was important timing for this solo journey of his. 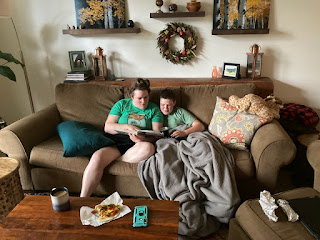 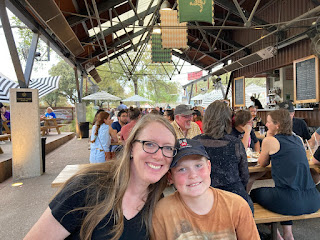 He is a man trapped in a boy's body and also still very much a boy somewhat threatened by the man within. This dichotomy creates a great deal of frustration both deeply internal and also frequently erupting on the very surface of his being. He's very good about talking with me about his frustrations, even when the words are difficult because the exact cause of his frustrations sometimes eludes him. He just knows that it IS - the frustration nags at him and the triggers to that frustration are not always easily identifiable. 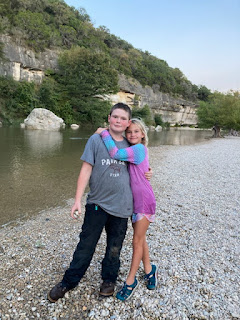 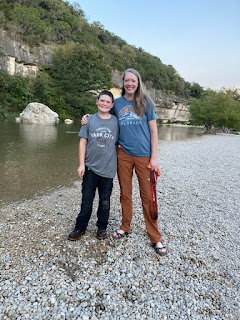 He is a leader marked by humility and honesty. He leads his brothers so well - not perfectly, mind you, but with great skill and natural ability. Sometimes his strength of leadership also acts against him (and all of us) as thwarting his will can be something not terribly unlike facing down a volcano. Ultimately, his bark is a far greater risk than his bite, because love truly dictates his desires and actions. He receives love openly and without condition, which I have come to realize is a gift not all are blessed with. He gives love in the same way. And I marvel. How can one so young teach me so much each day? He is helpful and capable to an extraordinary degree. 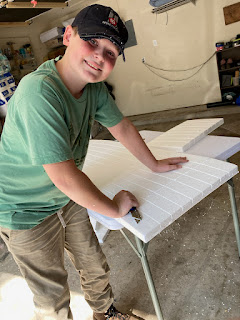 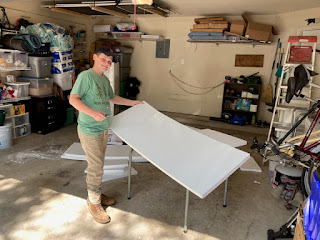 He talks with me about his hopes and dreams, about his worries for what the future might hold, about his heartbreak and challenges in loving his brothers, his disappointment with his parents, his profound joys and sorrows and even his thoughts on God as his Creator. He remembers almost anything he's ever been told, especially with regard to history and seems to comprehend in a very real way the importance of history in how it reminds us of lessons learned, tragedies we can avoid (should we choose to remember the history that humanity has spelled out for us), and things done right/well. It's the whole-picture-perspective which he owns, and it is amazing. 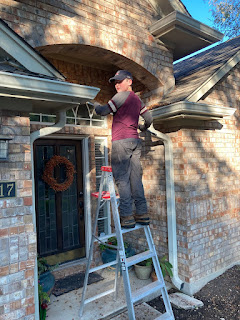 He also still has conversations with his Giraffe, Lofty (whom I tease him about, saying Lofty is actually a Yiraffe, since his neck is way too short to be an actual Giraffe). They are epic conversations and he is the mouthpiece to Lofty. Lofty is a very expressive Yiraffe, often much to our chagrin. :-) 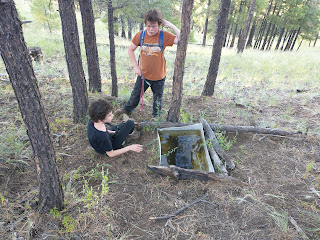 Madigan can spend hours playing Roman Legion with his brothers and he still rides David, his stick horse, when he rounds up the horses and cows at night. Be. Still. My. Heart. It is these boyish parts of the man that I treasure and hold close to my heart. 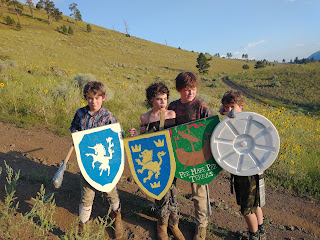 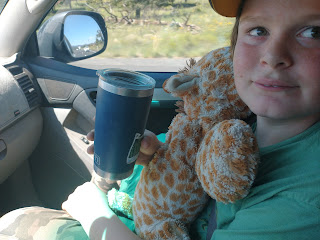 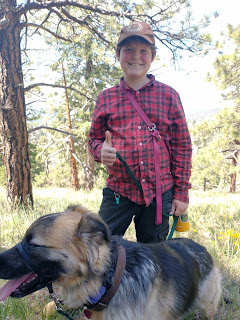 He has the ability to see people and their needs. While in Austin, Ankie Tae bought him an ice cream sandwich when they stopped for gas. When she handed it to him, he asked her if she would be okay if he gave it to a young boy he saw sitting by himself, looking alone and sad. She, of course, agreed, and he trotted over to hand his sandwich to the boy, who eagerly took it. She said Madigan's joy was abundant and it filled her heart.

The "gun" he built from a metal detector and other various items. :-) 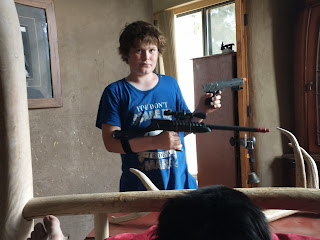 So, here's to ever-so-many more conversations with Giraffes, to countless rides on that great stick horse, to water fights in the hose with his brothers, to long conversations on the porch swing over everything and nothing and to all that makes this boy a truly great man. 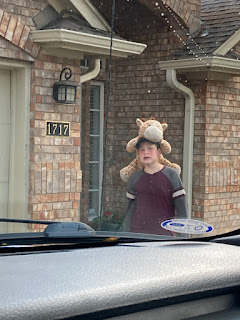 Madigan is truly an amazing treasure and so loving and lovable!

I have decided to cancel his ticket home. He’s going to stay. Forever.

My first encounter with this young human.....my great nephew, was in 2013 when Kaysee & I stopped by you guys' home in Nashville. All of us were taking a walk. Madigan was holding your hand and pulling you fast down a hill.
He said "Mommy we are moving with great
Propulsion". I think he was 3 or 4 years old. LOL He is growing with that same great propulsion.:-) Oh if we could just slow them down a bit to not have them grow us so fast. I do love him so!!!

Amen! I was just talking about him with a friend over coffee and she said how very much wisdom he seems to have way beyond his age. Too true. Watching him emerge from boyhood into manhood reminds me of those early months when he was so obviously yearning to crawl, then walk, then run but his baby body just wasnt letting him. That red hair didn’t help much😂 Love him so much!!!