I felt like grumbling yesterday as I stood outside in the "cold", cloudy weather watching people rifle through my discarded items (most of which were donated to me to help raise funds to cover Sabina's upcoming surgery), looking for treasures. A toothless man rode up on his bicycle and immediately began a conversation with me and a few others. He asked me how much I would take for a blender and explained how difficult it is to get nutrients due to the missing teeth. I told him to pay whatever he had, and our conversation continued in many other directions - for almost 2 hours.

He met Sabina and after he had heard her story, he whipped out his ancient cell phone and dialed a caring friend with a big heart. He relayed the details in full, and then got off the phone and told me that he and his friend, Ron, would be returning in an hour for Ron to meet Sabina and help me brainstorm about fundraising opportunities.

Charlie, who lives in a storage shed, along with all the treasures he has procured over the years, showed me his new glasses which were made especially for him by a local optometrist (at no charge). He talked about various members of the community and it became rapidly apparent to me that this man is a well-connected, and even more well-loved member of our local community (even my neighbor greeted Charlie on a first-name basis). His heart was so tender toward Sabina and toward the children. He told them stories and poetry that he had written, and he sang an exact rendition of a song he admires in a voice clear, and a tone so beautiful I found myself tearing up. He explained all the ways that He sees the hand of God working in every tiny detail of our lives and in the lives of each valuable person he encounters.

He was quickly warming the hearts of each person that stopped at the sale and I was quite comfortable letting them think it was his sale to benefit Sabina because he was doing a stellar job! He and Ron schemed together and located a free dining table/set of chairs to give me to sell for Sabina's profit. Charlie called me today to tell me that Ron posted information about Sabina and received over $200 in pledges by this afternoon. Then he told me that the blender had worked perfectly, that he had blended up canned vegetables last night and had a "really wonderful meal. I am just thrilled and want to thank you so much for the blender and for being hospitable and caring." How do I explain how he touched my life? To see so much compassion and kindness in one person for so many, to see genuine interest and concern for the details of life. It's so easy to live our lives nearly autonomously when it comes to the details of our lives, the hurts, the joys, the suffering. Charlie has crossed that barrier (many times over, quite apparently) and lives alongside those he encounters, meeting them where they are.

Tomorrow, I'm inviting Charlie to come share a meal with us and some of our closest friends because a treasure like Charlie should be shared. I'm going to make warm soup and we'll have hot chocolate for dessert, in consideration of any dental setbacks. 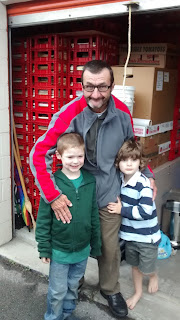 So good to hear some good news - thanks for sharing Eryn!