We call her Sabina, our Crazy White Dog, but she's way more than just that. She loves her boys and is the best shepherd any mom could ask for.

Last week, two guys came to our farm to pick up some hay that I was selling. They were very kind and polite and Sabina treated them cautiously as she always does, but she was friendly to them. I had Madigan with me and as we were leaving they offered to give us a ride down the hill where I would open the gate for them to leave. I hopped out of the truck, holding Madigan, opened the gate, returned to say goodbye to them and then walked back to lock up the barn. That was when I realized that Sabina wasn't in the field. I turned just in time to see her running alongside their vehicle as fast as she could go. I called for her, but their trailer was rattling so much that she couldn't hear me. So, I ran to my truck and called the guy on his cell phone, letting him know that my dog was following him. He had already gotten almost to the next intersection where the main road starts. He stopped and sure enough there she was, right beside his truck.

I stood at the top of the hill, calling for her and though she heard me, she didn't immediately come. Then, I place Madigan down on the ground where she could see him from the distance and she came galloping back to us as quickly as she could. She ran up to Madigan, sniffed him from head to toe and then did it again, as if to see if he was in one piece and alive. I told her she was a good dog, placed her back in the field and headed for home. The guy called me back a few minutes later and said, "You better keep that dog. She thought your son was in the car with me and she wasn't going to let me out of her sight." She's definitely something special. 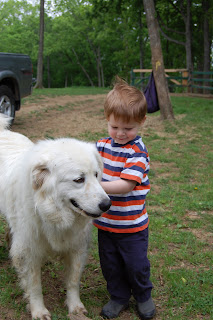 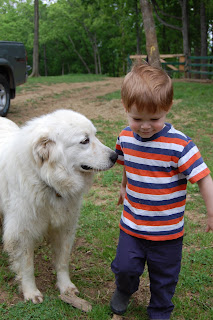