Man and his horse

Madigan tends to obsess about the care we give Devany: hay, grain, water, "coat" (blanket), top pasture vs. bottom pasture, whether or not she has company for the night or is all alone, etc. Last week we went out to do chores, but we were changing the routine slightly in preparation for adding a new horse to the mix. We decided to leave Devany in the top pasture, while turning the two grown up horses into the larger pasture, below. As we were leaving, having completed our evening chores, Madigan hopped into the truck and proceeded to have a complete meltdown. He was frantically screaming, "Devs, Devs, Devs", so I asked him what was wrong? He was so distraught he couldn't immediately convey his concerns, but just kept repeating her name. I assured him that Devany was fine and even unbuckled him from his carseat so that he could see for himself that she was indeed alive and well.

He continued to whimper, though, and said, "Devs, hay". I showed him her full hay bag, hanging near her. Then he said, "Devs, Gain". I told him I had given her her grain earlier and she had already finished it all. Then, "Devs, water". I took him over to see her full water bucket. But he was still not completely consoled. Finally I said, "Bundle, Macchiato (the goat) and Crazy White Dog will be with Devany tonight, watching out for her and keeping her company. She won't be alone. See, they're right there beside her." He paused, took a long look and said, "White Dog". He must have finally been convinced that we had provided Devany with the appropriate care, because he stopped crying and told me he was ready to go home. 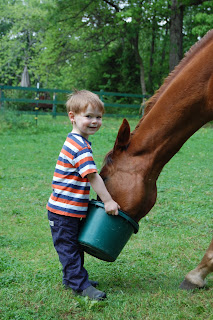 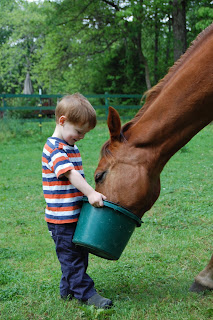 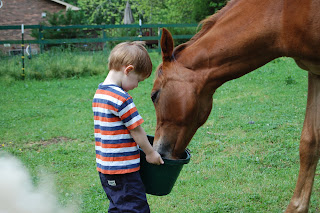 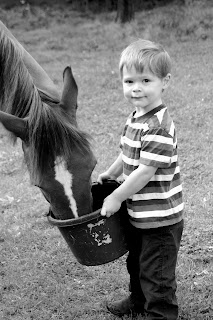 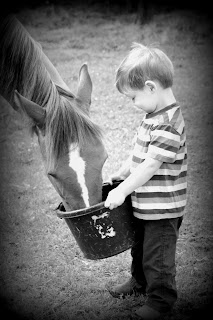 We experienced a similar meltdown yesterday, but it was about puzzles, and not horses...and WAY less about caring for another living thing. During and after every bite of dinner for the first 10 minutes, the child whimpered "mo puzzle" with a slight question mark.

Good to know Madigan can teach her a thing or two about watching out for the entire family (4 legged folks included!).

oh my word, I love that red-head so much!