I love this little boy more than words can say. He has such a sweet disposition and (even though his mommy starves him) he almost never complains. He's a GIANT... big feet, big hands, big torso, big everything. He's only 5 months old but already wearing 9-12 month clothing. And he's a cuddly teddy bear.

He can carry on a rather charming conversation with any willing participant. He's a huge helper at the barn, already, riding in the backpack overseeing all of mommy's work. He loves his big brother and watches his every move (hence, why we've been cracking down on the frequent bouts of screaming from the Tiger, of late - don't want Declan to pick that up!). He is very interested in numbers/letters/words and whenver we count from 1-5, he always lights up at 5 because we follow it up with a tickle on the nose. So fun to watch! I've been putting his play station on the kitchen counter, and though I've lost a good percentage of my counter space, I've gained one happy interactive boy!

And, on a COMPLETELY unrelated note... I'm giggling right now at my husband who just put on Virginia's vest which is so small on him it's embarrassing and totally hilarious. He never claimed that fashion was his strong point, though. 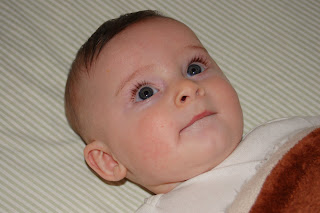 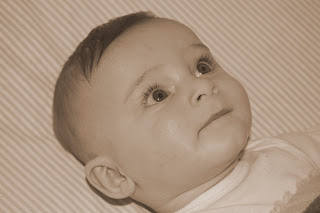 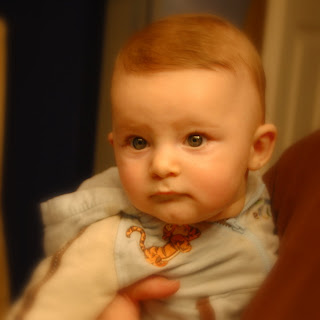 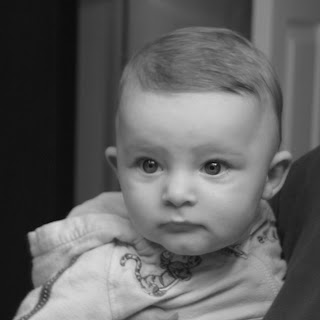 Declan has a handsom old world face, and I think you named him well! :)

Such a handsome boy!