The floor is shaking. There is a shouting match going on between Madigan and the Tiger within. Then, the cadence of hearty laughter, followed by "No, No, Come!" (I assume Tigger-Hun stepped out of line, momentarily). Madigan is in his crib for, you know, a "nap". Naptime for him has always been a battle, between him and the Tiger inside who won't sleep. I've implemented all sorts of creative techniques, from warm milk to hearty hikes, to try to ease the process and encourage slumber. Today, the boy walked the entire fence line with us to check for breaks in the electric wire, downed trees or broken boards. That's a LONG walk for little legs over rough terrain. Yet, he is none the wearier. Last night we took him for a walk with Valiant dragging him along at a full run. Still, the Tiger War prevailed upon our return. Sigh.

On another, slightly related, note... I've decided to start giving the boy "chores" to help keep him occupied during the daytime, when we're not at the barn doing "man chores". This website gave me some fun ideas and I'll keep you posted on our success!

And here are some Madigan-you-are-so-funny moments from this week:
And, what's going on in Declan's world, you ask? Well, he's soundly asleep. Sweet boy. 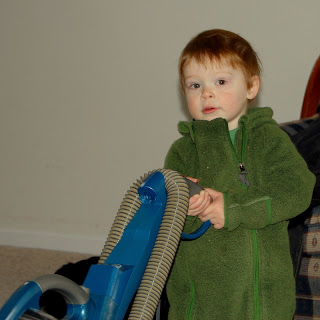 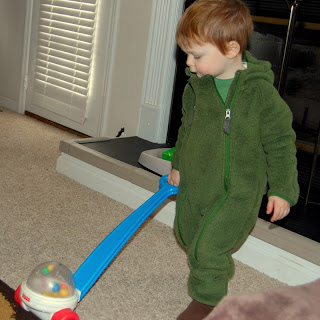 You make me laugh and cry at the same time... such precious momentos of memory.

too funny, to bad you weren't closer he could come over to Auntie Jeannie's and vac until he is wore out. Maybe then he could sleep, sleep, sleep.